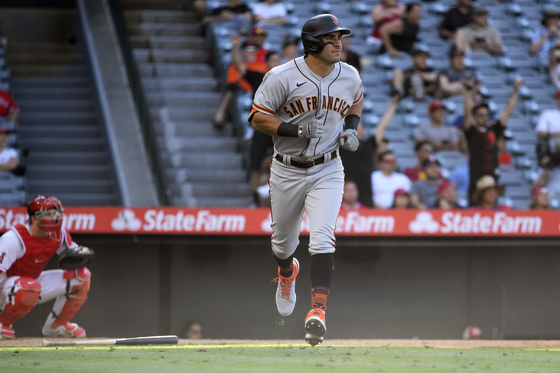 
The Hanwha Eagles became the first team to complete their foreign player lineup for the 2022 season on Friday, with outfielder Mike Tauchman joining pitchers Nick Kingham and Ryan Carpenter, who both re-signed with the club.

Tauchman debuted with the Colorado Rockies in 2017, playing two seasons before joining the New York Yankees in 2019. That year, Tauchman made a name for himself in New York, hitting .277 with 13 home runs.

His performance dropped off the following year and this season he was traded to the San Francisco Giants. Over five years in the big leagues, Tauchman has appeared in 257 games, batting .231 with 78 RBIs and 17 home runs.

Tauchman joins Kingham and Carpenter in Daejeon. Both pitchers have already re-signed for the 2021 season, making Hanwha the first club to have filled the maximum-three foreign player slots for next season.

KBO clubs are acting quickly to sign foreign players this year, with the MLB lockout and the success of a number of former KBO stars upon returning to the majors making the Korean league look like an increasing attractive alternative for big leaguers who need a change of pace. As of press time, 10 of the league's 30 spots had been filled, eight of them by new players.

The Doosan Bears and Kia Tigers are the only team yet to sign a player.

Additionally, the Giants announced Sunday that coach Hank Conger, who left the team to join the Minnesota Twins, will be replaced by former major league catcher Gerald Laird.