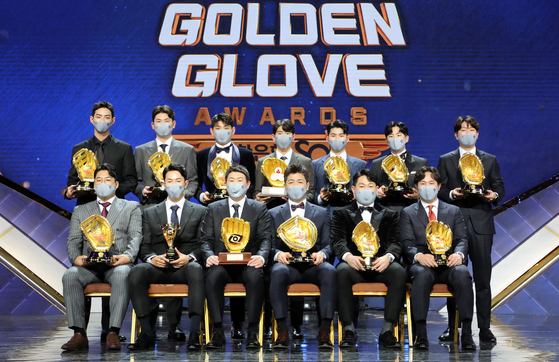 The 2021 Golden Glove winners pose with their awards at the Golden Glove Award ceremony at COEX in Gangnam, southern Seoul on Friday. [NEWS1]


Third baseman Choi Jeong and catcher-turned-designated-hitter Yang Eui-ji each picked up the seventh Golden Glove of their respective careers on Friday at the KBO's biggest award ceremony, with 2021 MVP Ariel Miranda also adding to his trophy haul with the pitching award.

The KBO awards 10 Golden Gloves each year; one each for pitcher, catcher, first base, second base, third base, shortstop and designated hitter, and three outfield awards given regardless of specific position. Unlike the MLB's Gold Glove, KBO Golden Gloves are normally decided based on offensive prowess, not defensive performance.

With seven Golden Glove awards each, Choi of the SSG Landers and Yang of the NC Dinos now come in at No. 3 on the league's all-time Golden Glove ranking, still three awards behind former Samsung Lions star Lee Seung-yuop with 10.

Choi led the KBO with 35 home runs this season, batting in 100 off 121 hits for a .278 batting average. Choi has earned all seven of his Golden Glove awards at third base.

Yang had a slightly unusual year, with an elbow injury forcing him to play the majority of the season as designated hitter rather than catcher. As a result, Yang, who batted .325 with 156 hits, 111 RBIs — enough to lead the league — and 30 home runs, won this year's Golden Glove as designated hitter for the first time.

With Yang taking the DH award, Kang Min-ho of the Samsung Lions picked up the Golden Glove for catcher, taking his sixth award in his 18th year in the KBO.

First base went to KT Wiz star Kang Baek-ho for the second year in a row. In only his fourth year in the league, Kang continued to dominate this season, staying close to the .400 mark throughout the first half of the year. A difficult Tokyo Olympics experience triggered a dip, but Kang still finished the season with a .347 batting average, 179 hits, 102 RBIs and 15 home runs.

Second base went to Jung Eun-won of the Hanwha Eagles, winning his first Golden Glove with a .283 batting average, 140 hits, 39 RBIs and six home runs.

Shortstop also went to a first-time winner, Kim Hye-seong of the Kiwoom Heroes. Kim Hye-seong stepped into former teammate Kim Ha-seong's shoes this year, taking the shortstop spot left empty by the San Diego Padres utility man's move to the majors. Kim Hye-seong more than lived up to that legacy, hitting .304 with 170 hits and leading the KBO with 46 steals.

The three outfield spots went to Lee Jung-hoo of the Heroes, Hong Chang-ki of the LG Twins and Koo Ja-wook of the Lions. While Koo and Hong were first time winners, Lee, who led the voting, picked up his fourth Golden Glove in a row, coming in second for the longest-ever streak by an outfielder.