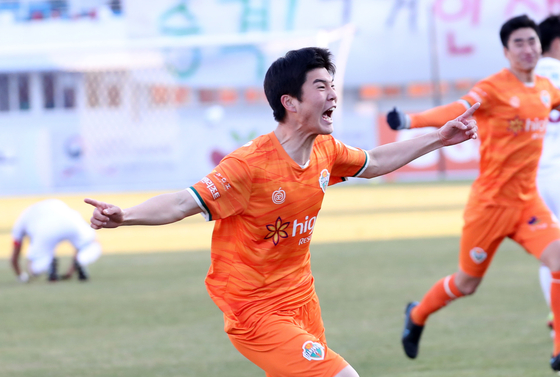 Hwang Mun-ki celebrates after scoring Gangwon FC's fourth goal in a 4-1 victory over Dajeon Hana Citizen in the second leg of the promotion-relegation playoff on Sunday at Gangneung Stadium in Gangneung, Gangwon. [NEWS1] 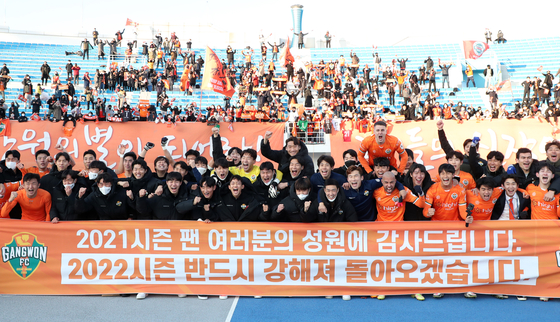 
Gangwon FC beat K League 2 club Daejeon Hana Citizen 4-1 after a big comeback in the second leg of the promotion-relegation playoff on Sunday to secure their spot in the top tier next season.

The big 4-1 win not only overturned Gangwon's 1-0 loss to Daejeon on Wednesday in the first leg of the playoff, but concreted their top tier status with a 4-2 on aggregate after the two playoff matches.

The second-to-last K League 1 club were Gangwon FC, who finished five points ahead of last-place Gwangju FC to narrowly avoid automatic relegation. The runner-up K League 2 club Daejeon Hana Citizen had to fight their way up to the relegation-promotion playoff.

Daejeon have been on good form throughout the season. They had the second-most goals this season in the K League 2, behind winner Gimcheon Sangmu.

On the other hand, Gangwon struggled throughout the season and at the verge of potential relegation, they had to sack head coach Kim Byung-soo on Nov. 4 and bring in former national team striker and ex-head coach of FC Seoul, Choi Yong-soo.

Choi taking the helm was just what Gangwon needed, as in Choi’s first two matches as head coach, Gangwon tied with FC Seoul then beat Seongnam FC 2-1 to avoid dropping down to last place. Despite losing their first playoff match 1-0, Gangwon were able to prove why they have been on the top tier for the last five years on Sunday. 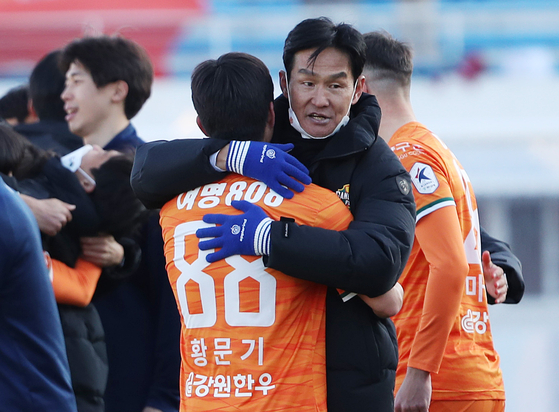 
Daejeon started out strong, taking shots whenever they saw a chance. That paid off in the 16th minute, when Lee Jong-hyun slotted in a screamer that soared across the pitch to find the back of the net. Then, in the 26th minute, Gangwon’s Kim Dae-won’s pass rebounded off Daejeon’s Lee Ji-sol and rolled into the net, leveling the score with an unfortunate own goal.

Daejeon were visible shaken from that own goal, and in the next three minutes the tide turned completely to Gangwon, as Lim Chae-min and Han Kook-young scored two quick goals to take the score to 3-1 just 30 minutes into the match.

Daejeon scrambled with a series of increasingly desperate attempts to reclaim their shot at promotion over the remainder of the match, but to no avail. Hwang Mun-ki’s 92nd-minute goal was the final nail in the coffin for Daejeon as the whistle blew with Gangwon up 4-1.

Alongside Gangwon, Gimcheon Sangmu will join next year’s K League 1 season as the K League 2 winner, rejoining the top tier after a one-year demotion due to moving locations. In the K League 2, Daejeon will be joined by Gwangju FC as the bottom K League 1 club this season.