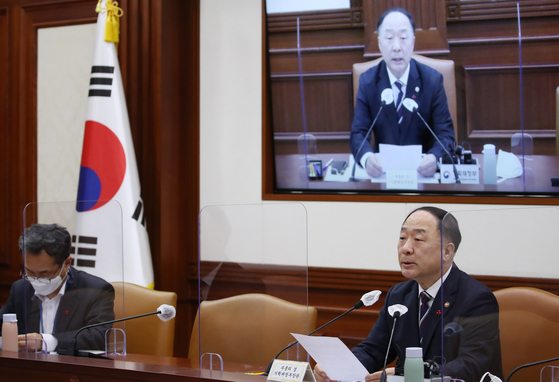 Korea is taking the first steps to join the Comprehensive and Progressive Agreement for Trans-Pacific Partnership (CPTPP), a multilateral free trade agreement involving 11 other nations.

Finance Minister Hong Nam-ki said Monday that China and Taiwan recently applied to join the agreement, and that the Korean government would start canvasing public opinion.

Hong said discussions on the CPTPP shouldn't be delayed considering the economic benefits it would have. But small businesses relying on the domestic market are likely to oppose it because it will allow cheaper imports.

According to the Korea Institute for Industrial Economics and Trade, trade by the 11 countries amounted to $5.7 trillion as of 2019, 15.2 percent of global trade volume.

The CPTPP was initiated by U.S. President Barack Obama and was meant to limit China’s influence in the region.

The Donald Trump administration withdrew from the pact in 2017.

Korea was unsure of whether to join until China applied for membership in September.

China is Korea’s biggest trading partner. Korea's exports to China accounted for 26 percent of all its exports in 2020.

Supporters of Korea joining the CPTPP argue that it could lose its competitiveness, particularly against Japan, by staying out.

Joining could also protect its trade with China, which was badly hurt in 2016 when Beijing punished Seoul for the deployment of U.S. missile shield system by choking off imports, encouraging boycotts of Korean products and banning group tours to Korea.

One downside is that members of the CPTPP are required to lift up to 96 percent of their import tariffs, more than under any other multilateral trade pact Korea is part of. That could have a big impact on Korean farmers.

According to the Korean government, the country has FTA deals with 57 countries, which are the equivalent of 80 percent of the world's GDP.