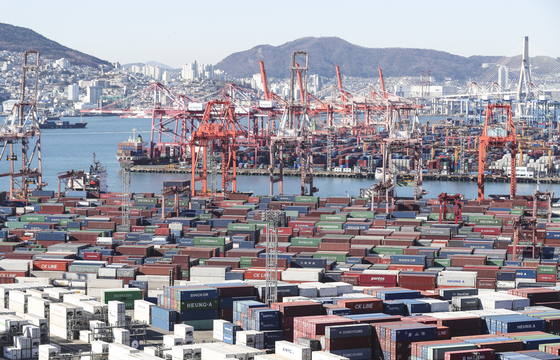 Cargo ready to be exported piled up at a dock in Busan on Monday. Korea's export as of Monday already broke all-time record for the whole year of 2018. [YONHAP]

According to the Korea Customs Service, Korea’s exports by Dec. 13 exceeded 2018's $604.9 billion, which was an annual record.
By the end of this year, they are expected to reach $640 billion.

This is the biggest amount since data started being compiled in 1956.

The Ministry of Trade, Industry and Energy cited strong performances in semiconductors, ships, electric vehicle batteries and displays such as OLEDs.

According to Omdia, a global technology analytics firm, Korea in the first nine months of this year held a market share of 58.9 percent in memory chips. U.S. trailed with 26.3 percent and Japan with 7.9 percent.

Samsung Electronics is the global leader in memory chips, with 37.9 market share, followed by SK hynix with 21 percent.

Korea ranked fifth globally in auto exports in the first nine months of this year. The world’s No.1 is Germany, followed by Japan, the U.S. and Mexico.

Korea is the second-largest exporter of ships. China is No. 1 with a market share of 23.7 percent. Korea's market share is 20.6 percent.

Korea also ranks second in sales of global batteries for EVs after China.

It has No. 1 market share positions globally in smartphones, TVs and OLED panels. 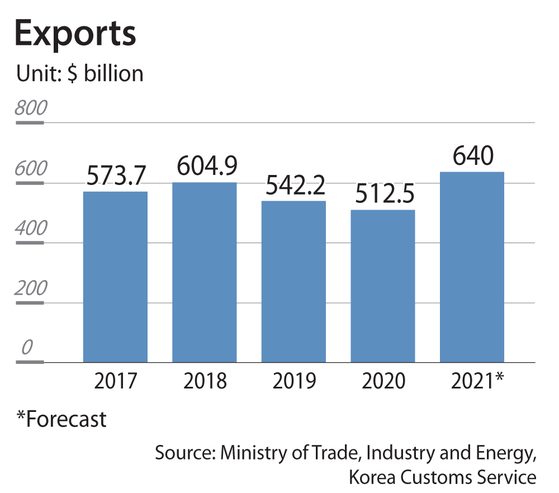 The government expects the current momentum to continue for exports next year.

However, there are risks in the new Covid-19 variant, Omicron, and slowing economic growth in China.

The World Trade Organization in October raised its projection for growth in world trade in 2022 to 4.7 percent from 4 percent.

The Organization for Economic Cooperation and Development (OECD) on Dec. 1 raised its forecast for Korea’s economic growth for 2022 from 2.9 percent to 3 percent.

“Export growth is projected to remain robust through 2023 on the back of strong global demand for major items such as IT products, machinery and petrochemicals,” the OECD report noted.

Buying from abroad continues to grow