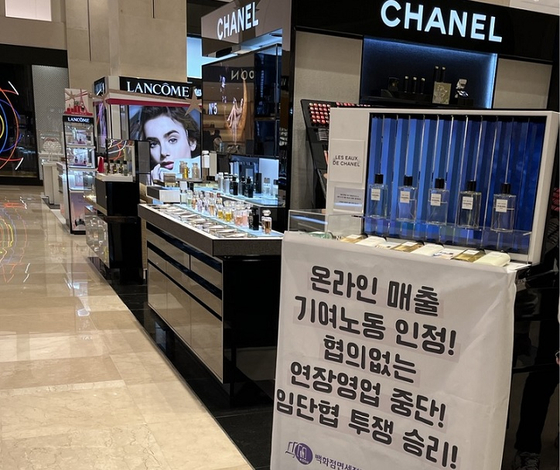 A banner hung at a Chanel store in Shinsegae Department Store in Yongin, Gyeonggi, on Saturday. [JOONGANG ILBO]


Chanel Korea's cosmetics sales staff say they're sick of being treated shabbily and are threatening to walk out.

They've hung a protest banner at a Chanel store inside the Shinsegae Department store in Yongin, Gyeonggi, and threatened to go on strike on Friday.

Chanel cosmetics sales staff have been demanding raises for 11 months. They are members of a union representing sales workers at department stores and duty free shops.

The union, which belongs to the Korean Federation of Service Workers' Union, was created in November 2019. Of a total 480 workers selling Chanel cosmetics, 390 are members of the union. The union also includes workers at other cosmetics brands, including L’Oreal Korea, L’Occitane Korea and Clarins Korea.

“If management does not responsibly negotiate, we will go on strike starting Dec. 17,” said a member of the union during a press event held in central Seoul last week.

They are demanding some part of the rise in Chanel Korea’s online sales, and guaranteed paid holidays when they work on national holidays. 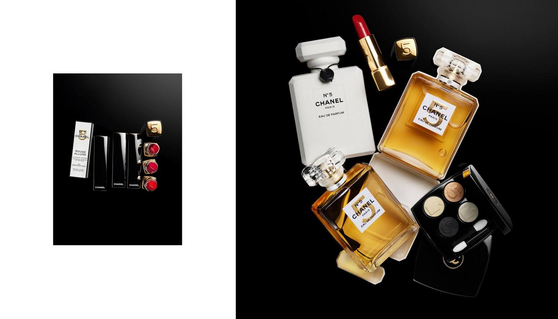 
The workers receive base salaries and a certain percentage of the amount of sales they make in stores. Though they technically have nothing to do with online sales, they say they do play a role: a lot of customers test products in stores and then purchase them online.

“Our monthly pay has been drastically reduced though our workload hasn’t been reduced,” said a 43-year-old worker for a luxury fashion brand at a department store. “Two years ago, the ratio of sales raised online and in stores was one to five. That ratio [for online and offline sales] has been reversed.”

“Over the past eleven months, Chanel Korea has negotiated in good faith, making every effort to reach an agreement with the union to maintain and enhance our competitive compensation for our staff,” said Chanel Korea in a statement. “Chanel Korea strives to adapt to the changing environment surrounding our Fragrance and Beauty division’s offline business while remaining open to discussion with our frontline employees about their evolving roles as well as areas of sales and services.”