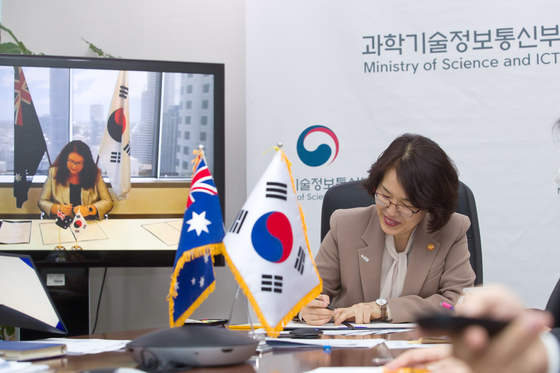 Lim Hye-sook, Minister of Science and ICT, and Melissa Price, the Australian Minister of Industry, Science and Technology, sign an MOU on space technology on Friday through a video call. [MINISTRY OF SCIENCE AND ICT]


The Korean and the Australian governments signed a memorandum of understanding (MOU) to cooperate on space, satellite and robotics technologies in an effort to take the lead in the space race, the Ministry of Science and ICT said on Monday.

Lim Hye-sook, Korea's minister of science, and Melissa Price, the Australian Minister of Industry, Science and Technology, signed the MOU on Friday via a video call and revealed the details on Monday.

“The Ministry of Science and ICT will start running a consultative team jointly with Australia’s Department of Industry, Science and Technology to advance specific projects in various fields such as satellite development, space exploration and satellite navigation,” Lim said in a press release.

The two governments will begin by looking into which projects to cooperate on, according to Korea’s science ministry. No specific agenda has been set.

The MOU came as a result of the first Korea-Australia space forum that was held last June, in which the two countries agreed to strengthen their aerospace capacities. This year was also the 60th anniversary of Korea-Australian diplomatic ties.

Korea has been enhancing its own satellite and rocket technology, as seen in the Korea Space Launch Vehicle-II (KSLV-2), also known as the Nuri-ho, that made it into space in October.

The potential of the two country’s cooperation is great, according to the science ministry, as Australia has a high demand for satellite imagery to monitor natural disasters such as wildfires, as well as vast fields that can be used as launching sites for rockets.

Korea and Australia are both members of a NASA-led lunar exploration mission called Artemis Accords. Australia joined the agreement in October 2020 and Korea joined last May as a part of extended cooperation in space and satellites discussed by Moon and U.S. President Joe Biden in a Washington summit.

The MOU will be effective for five years and will be renewed automatically if no party puts forward a formal rejection.