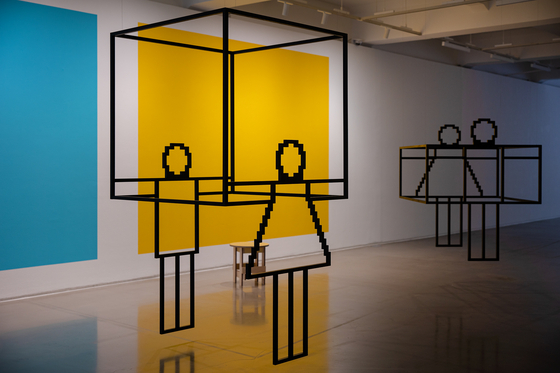 Hong Seung-hye's pixel sculptures “Aerial Dance”(2020-21) in her solo show ″On Stage″ as part of the ″IMA Picks″ project at Ilmin Museum of Art in central Seoul. [ILMIN MUSEUM OF ART]

They are 81-year-old Yun Suknam, often dubbed the godmother of Korean feminist art; 61-year-old Hong Seung-hye, pioneer of pixelated abstract art both through analogue and digital media; and 34-year-old Eunsae Lee, a fast-rising artist known for her colorful paintings of bold strokes hovering between expressionist art and cartoons. 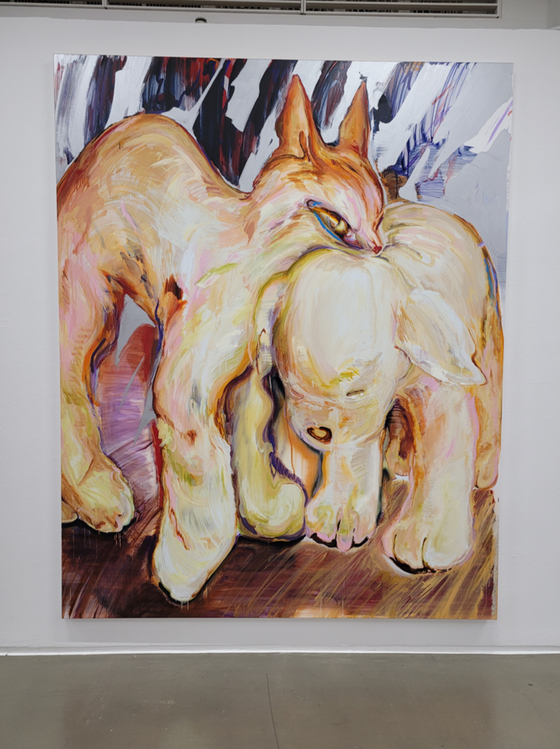 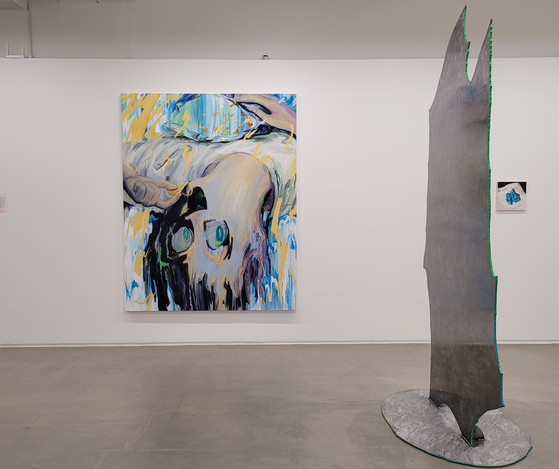 Eunsae Lee’s works in her solo show titled “Dear My Hate-angel-god” as part of the ″IMA Picks″ project at Ilmin Museum of Art in central Seoul. [MOON SO-YOUNG]


The “IMA Picks” exhibition starts with Lee’s solo show titled “Dear My Hate-angel-god” on the first floor. It features the latest of Lee’s paintings in her signature style, that is, paintings that depict what looks like a very casual moment but at the same time a moment of subtle tension and uneasiness, in bold strokes of strong colors and, partly in caricatural portrayals. Such paintings include “Double”(2021), “Reversed Woman Eating Chips”(2021) and “Overflowing Wine Glass”(2021).

The exhibits also include Lee’s sculptures in her “Ripping” series, which she is unveiling for the first time. They comprise of partially colored cutout steel panels. “The works resulted from my question about the act of painting and its limits and my willingness to experiment with sculptures which can use and influence space unlike paintings that should hang on walls,” the artist told the Korea JoongAng Daily on Tuesday. “Ironically, the sculptures ended with the extreme act of painting, as I cut out the steel panels with the gestures used when I paint and I polished the panels as if I were filling a canvas with drawings.” 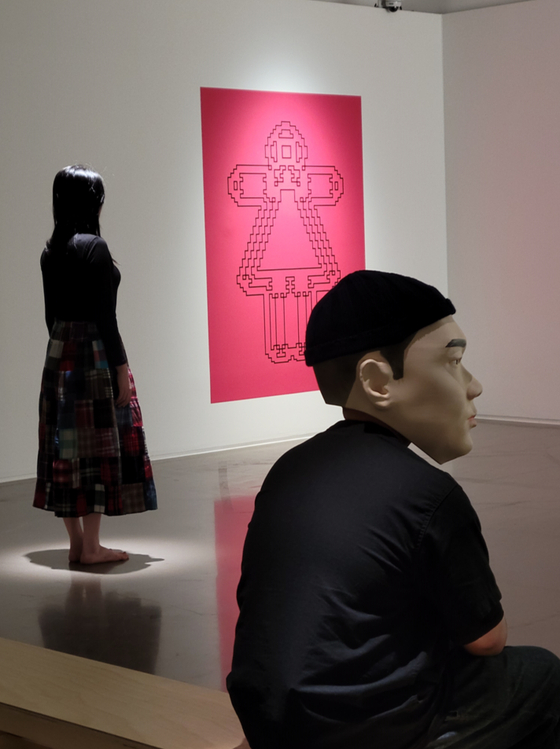 
On the second floor is Hong’s solo show titled “On Stage.” The artist’s works including pixel drawings such as “Musical Score”(2021), pixel sculptures including “Aerial Dance”(2020-21) and pixel animations projected on the walls and floor such as “Click Each”(2020-21) are all on view.

However, they don’t complete the exhibition. In this show, Hong regards the space as a kind of stage and her artworks as stage art and props. Every Saturday during the exhibition, five performers, who respectively play the role of “the artist,” “the voice actor,” “the audience,” “the princess,” and “the lover,” walk around, sit and meditate, soliloquize, lie down on the floor or contemplate the artworks. And the audience are also performers on this “stage,” according to the artist.

Hong’s words will resonate, when the viewers see how the performers interact with the artworks. Seeing a performer acting the role of “the audience” slowly plays with the projected image of ”Physiological Memory-1”(2017-2021), a simple but ever-changing pixel animation which strangely has a lyrical and poetic ambience, the real audience will realize how beautiful the act of interacting with an artwork can be.

Hong added “I believe that geometric abstraction can be practiced in society through the means of architecture and design. I have turned the exhibition space into a stage with my works, which is a kind of design.” 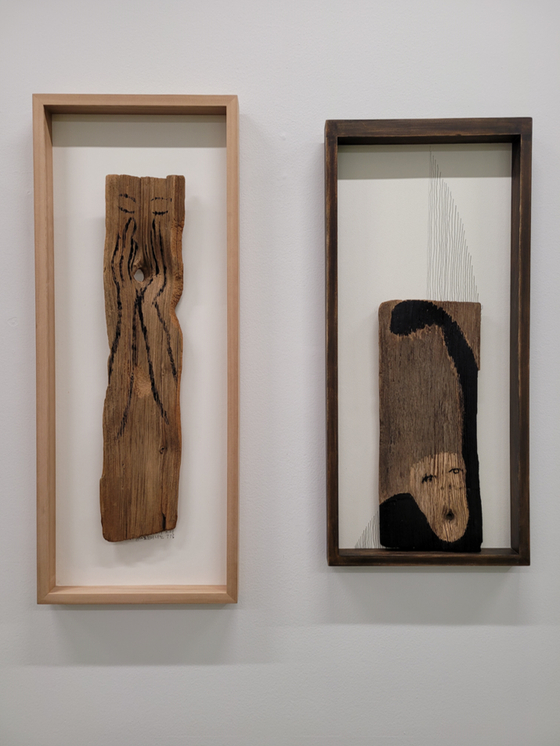 Yun Suknam’s works in her solo show “Crying Out in the Silence” as part of ″IMA Picks″ project at Ilmin Museum of Art in central Seoul. [MOON SO-YOUNG]


Yun’s exhibition titled “Crying Out in the Silence” on the third floor looks like a small-scale retrospective, as the exhibit encompasses her oil paintings from the early 1980s when she started painting in her 40s; the colored wooden works in between painting and sculpture, for which she gained international fame; and her latest portrait paintings in the style of chaesaekhwa, or Korean traditional color painting.

Regarding the latest paintings, the museum said in a statement, “These paintings display Yun’s resolve toward transnational friendship and solidarity through the portraits of Japanese friends who have been crucial supporters for the continuation of her work: Kokatsu Reiko (curator), Shinobu Ikeda (collector), and Kim Hyeshin (interpreter, second-generation Korean-Japanese).”

While all the three solo shows are intriguing, they are not very much linked to one another. However, by watching them together, viewers will be able to get a glimpse of the contemporary history of Korean female artists.