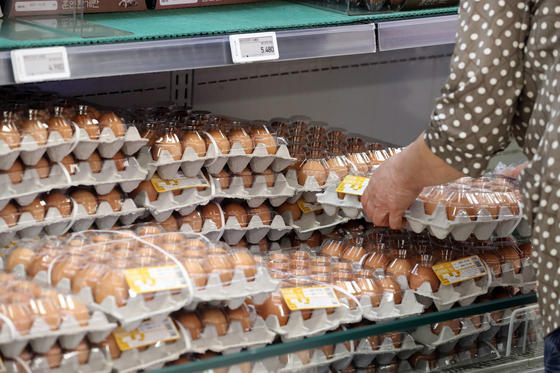 Flats of eggs are stacked on top of each other at a discount mart in Seoul. To fight inflation, the government will import 10,000 tons of eggs in December and continue to exempt them from tariffs. [NEWS1]


All available levers are being pulled to tame inflation, with the authorities fixing prices over which they have direct control and monitoring others for possible intervention.

The Ministry of Economy and Finance is currently mapping out plans to maintain annual inflation under 2 percent next year. This year's goal was 1.4 percent.

The consumer price index rose 3.7 percent on year in November — the highest since December 2011 — and 3.2 percent in October. Crude oil and other raw material prices have been on the rise, pushing up the prices of almost everything else.

"If the government aims to maintain inflation at 2 percent, that will be a signal that it is keeping an eye on inflationary pressure," said Joo Won, senior researcher at Hyundai Research Institute.

LG Economic Research Institute projects next year's consumer prices to rise 2.2 percent. The institute expects the price index to rise 2.6 percent in the first half of next year and then gradually fall to 1.8 percent in the second half as global crude oil prices stabilize and demand falls.

To tame consumer prices, the government plans to freeze utility prices such as electricity and gas bills until the end of the first half of 2022.

"There is a high possibility that companies will increase the prices of products and services at the beginning of the year," said a ministry official. "If the government allows a utility bill increase, which is one of the only prices that it has control of, inflation will get out of control."

The presidential election will take place in March next year, which also makes it unlikely for the government to try raising electricity or gas rates.

Freezing utility bills may be good news for some, but will weigh on companies such as Korea Electric Power Corporation (Kepco) and Korea Gas Corporation (Kogas). Kepco reported a net loss of 1.03 trillion won ($871.8 million) in the third quarter, shifting from a net profit of 1.25 trillion won a year earlier. Kogas reported a 85.7-billion-won net loss, an improvement from a net loss of 284.3 billion won a year ago, but is still in the red.

"Raising electricity bills is a discussion that both the government and Kepco can't bring up easily, and it could be passed to the next administration," said Yoo Seung-hoon, a professor of energy and industry policy at Seoul National University of Science and Technology. "But if bills aren't raised this time, achieving carbon neutrality as the government announced may become hard to do."

Public transportation costs and water and sewage bills will also be kept the same next year, or rise at minimum levels.

Prices of 17 agricultural, livestock and fishery goods are being monitored by the government starting this week ahead of the Lunar New Year. Prices are always monitored before the holidays, but the government started three weeks earlier than usual to stabilize prices. Napa cabbages, radishes, apples, beef, pork, eggs and rice are on the list of the 17 goods.

About 30 million eggs will be imported by the government this month, along with 10,000 tons of garlic. The current tariff exemption on imported eggs, which was made effective in January as a solution to rising prices amid the avian flu, was to end Dec. 31. The government extended it to June 2022.