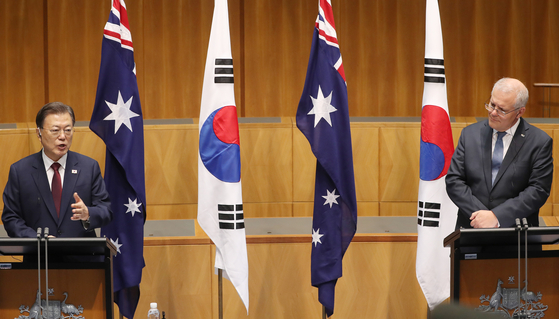 Moon and Morrison held a joint press conference and announced that the two nations agreed to bolster defense and security cooperation, establish a net-zero emissions technology partnership and work towards securing a stable supply of raw materials and critical minerals.

Korea and Australia "share common values such as democracy, human rights and a market economy," said Moon, as he announced that the two countries elevated bilateral relations to a comprehensive strategic partnership. The two countries mark the 60th anniversary of diplomatic relations this year.

Regarding cooperation to stabilize the supply chain, Moon said, "Australia is rich in minerals and Korea is a major global manufacturer of batteries and electric vehicles (EVs). We believe that the two countries will play a vital role in the global supply chain going forward."

However, Moon also said that Korea is not considering a diplomatic boycott of the Beijing Olympics and has not been asked by any country to do so.

Australia joined the U.S.-led diplomatic boycott of the Winter Games last week in protest of China's human rights abuses, along with several other American allies and partners such as Britain, Canada and New Zealand.

Moon kicked off a four-day trip to Australia Sunday, the first foreign leader invited to the country for a state visit since the outbreak of the Covid-19 pandemic last year.

He is the first Korean president to pay a state visit to Australia in 12 years.

"Together, we will become the global pacesetters in the international community," Moon told reporters, stressing their role as "major players" in the Asia-Pacific amid challenges such as climate change and supply chain disruptions.

This includes "bolstering strategic cooperation for regional stability, peace and prosperity" in areas such as defense and cyber technology, he said, highlighting Australia inking a major arms deal to purchase K-9 self-propelled howitzers from Korea.

The countries also will continue to work together on health issues and post Covid-19 economic recovery, space cooperation and a digital transformation.

They agreed to cooperate toward 2050 carbon neutrality, signing a memorandum of understanding on zero and low emissions technologies, to boost collaboration in areas including the hydrogen economy, solar energy and expanding eco-friendly cooperation.

Australia is rich in raw materials and critical minerals, including iron ore, coal and liquefied natural gas, which are expected to complement Korea's efforts to strengthen its electric vehicle and secondary battery industries and support its energy transition. The two sides will collaborate on areas such as clean hydrogen initiatives and carbon capture, utilization and storage (CCUS), an emissions reduction technology.

Morrison also announced a travel bubble arrangement with Korea that will begin Wednesday.

Fully vaccinated Koreans and Japanese will be able to enter Australia without a mandatory isolation period for the first time since the onset of the Covid-19 pandemic, and after the country closed its borders in March last year. Morrison said the two countries have low coronavirus death tolls and high vaccination rates.

Morrison noted that some 20,000 Korean students study in Australia every year, and said he also looks forward to welcoming back tourists, business travelers and skilled migrants.

"Our comprehensive strategic partnership with the Republic of Korea is underpinned by our joint commitment to defense and security cooperation," said Morrison.

He stressed the two countries are working together "to build those reliable trusted supply chains in these critical minerals and rare earths that we know will power the new energy economy and the global economy into the future."

"Together, we share a view about the liberal democracies in today's world, and particularly in the Indo-Pacific," said Morrison. He stressed the importance of having the rule of law and for countries in the region to have choices in their economy and peace and security.

He added, "We look in forward in particular, President Moon, to the day that the Korean Peninsula will have peace and security long into the future."

Moon said he explained the Korean government's efforts to advance the peace process on the Korean Peninsula, including the idea of an end-of-war declaration, and that Morrison endorsed Seoul's efforts.

In the joint press conference, Moon said that the United States, China and North Korea agree "in principle" on declaring a formal end to the 1950-53 Korean War. While noting Pyongyang has been demanding a withdrawal of Washington's "hostile policy" as a precondition for talks, he said Seoul will work toward enabling the resumption of North-U.S. dialogue "as soon as possible."

He said that "an end-of-war declaration is not in itself the ultimate goal" and signifies "the end of the unstable armistice regime that has continued for nearly 70 years that that on the other hand can also serve as momentum to restart talks between the South, North and the United States." It can also "serve as a starting point from which negotiations on denuclearization and a peace regime can begin in earnest in the future."

Moon indicated that his Australia trip did not signify any intent to alienate China, amid increased pressure on American allies to take a clearer stance on issues amid the intensified Sino-U.S. rivalry.

"The Korean government is not considering a diplomatic boycott of the Beijing Olympics, nor have we have received any request from the United States or any other country to take part," Moon told reporters.

Australia and China have faced deteriorating relations, heightened after the recent establishment of the Aukus trilateral security pact with the United States and Britain. Under this pact, the United States will help Australia build nuclear-powered submarine capabilities. Australia is part of another U.S.-led strategic dialogue with Japan and India, the Quad, also aimed at countering China's growing influence in the Indo-Pacific region.

Referring to Australia's efforts to build its sovereign defense capability, Morrison said, "Korea is an important partner in that journey, both in our security arrangements, but also in the building of our sovereign capability in defense manufacturing." He likewise stressed the importance of Aukus and Quad.

Addressing a reporter's question on such tensions with China, Moon told reporters, "Australia made an independent decision as a sovereign country, and Korea respects Australia's decision. We also understand that Australia is working for peace and prosperity in the Indo-Pacific region and does not want regional conflicts, and Korea will work closely with Australia on this."

He stressed that his visit "has nothing to do with our position on China."

"South Korea and Australia share the same values and are very similar from a geopolitical point of view," said Moon. "First of all, the alliance with the United States is the cornerstone of diplomacy and security. But on the other hand, economic relations with China is also very important."

Moon said Korea will continue to "build a strong alliance with the United States" and work to "maintain a harmonious relationship with China."

He added another factor is that "China's constructive efforts are needed for denuclearization and peace on the Korean Peninsula." Moon pointed out that there are inevitably issues of conflict and competition with China.

After the summit, Moon attended a state luncheon hosted by Australian Governor-General David Hurley at his official residence.

He later paid respects at the Australian National Korean War Memorial in Canberra and was scheduled to have dinner with war veterans. 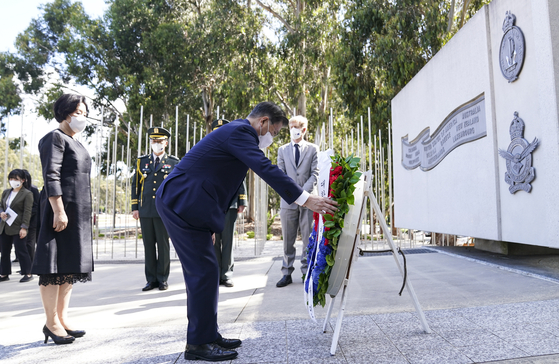 Korean President Moon Jae-in, accompanied by first lady Kim Jung-sook, lays a flower wreath at the Australian National Korean War Memorial in Canberra Monday, as a part of a four-day state visit to Australia. Australia sent around 17,000 troops to fight alongside South Korea during the 1950-53 Korean War. [YONHAP]