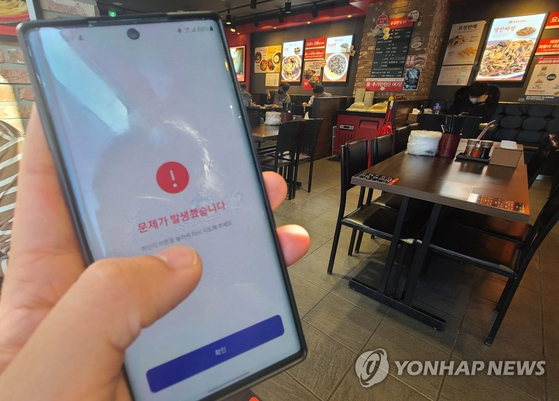 The COOV app crashed due to traffic on the system during lunch hour Monday. From Monday, Korea is requiring vaccine passes to enter 16 types of facilities including cafes and restaurants. [YONHAP]


The country’s expanded vaccine pass system got off to a poor start Monday as it crashed around lunchtime because too many people were using it.

The COOV app, which holds an official digital copy of Covid-19 vaccination records, was nonfunctional from around 11:40 a.m. to 1 p.m., preventing people from using it to gain access to facilities like restaurants and coffee shops.

At around 6 p.m., the system again became very slow to load or nonfunctional.

Other apps connected to COOV for QR code verification such as Kakao, Naver and Toss Bank, also did not work, either leaving the QR Code screen blank or displaying a wrong vaccination status.

Starting Monday, Korea started requiring vaccine passes or a negative PCR test conducted within 48 hours to enter a total of 16 types of facilities including restaurants and cafes.

The glitch occurred right before lunchtime as many people were trying to grab meals at restaurants.

“About ten customers in front of my store were all showing me blank screens on their phones, saying that their QR codes won’t load,” said a restaurant owner in Yeongdeungpo District, western Seoul.

“After about five minutes, I just let them in and asked them to at least check in by writing their names and phone numbers on paper.”

The Korea Disease Control and Prevention Agency (KDCA) said the problem occurred due to a sudden surge in online traffic as many people were using the app at lunch hour.

“The KT DS Cloud, which is where the COOV server is located, crashed because a large number of people were trying to get into the app at the same time,” said a KDCA official during a Covid-19 briefing on Monday afternoon.

In addition to technical issues, some store owners, especially of busy restaurants, are calling the vaccine passes unrealistic.

“Checking everyone’s vaccine status is simply not possible especially during lunchtime because we get so many customers,” said a 61-year-old surnamed Jeong who owns a Korean restaurant in Seoul.

“In order for us to properly follow this policy, we would need to hire a separate worker whose sole job would be to check the customers’ vaccination status.”

An owner of a cafe at Gwanak District, southern Seoul, said that implementing the government’s policy was costly.

“We used to use a paper chart to check in our customers, but now that we have to check their vaccine status, we have to buy QR code scanners, which are around 100,000 won [$83],” said the cafe owner.

“The government has set all these rules and has made the store owners responsible for checking if people follow their policies while not offering any practical support for us.”

Under the newly expanded vaccine pass policy, customers in violation of the policy will be subjected to a 100,000-won penalty. The owner of a facility or store can be charged 1.5 million won when caught a first time, and 3 million won if caught again.

Also, facilities and stores will be subjected to a 10-day business ban if caught violating the policy a first time. That will grow to 20 days a second time and three months for a third. They will be shut down completely if they violate the policy a fourth time.

The expanded vaccine passes do not apply to people eating alone in restaurants and cafes.

Also, up to one person in restaurants and cafes can be unvaccinated in a group.