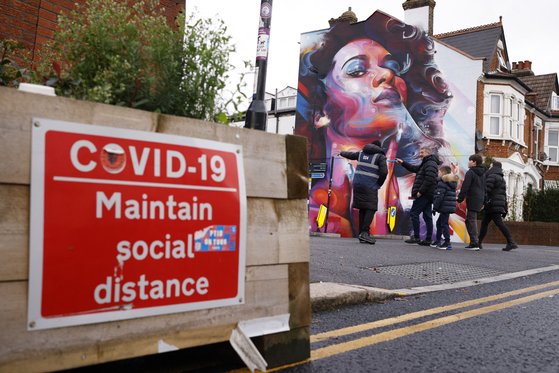 A sign outside Brighton's American Express Community Stadium reminds fans to socially distance on Sunday. Brighton were scheduled to face Tottenham Hotspur on the same day, but the game was canceled due to a Covid-19 outbreak. [REUTERS/YONHAP]


Covid-stricken Tottenham Hotspur were unable to play their Sunday fixture against Brighton, with a small number of players instead gathering at the club's training ground to resume training for the first time since the outbreak began.

Korean star Son Heung-min is among the players absent from training, presumably having contracted Covid-19. Under British law, any infected players will have to isolate for 10 days. Assuming he then tests negative, Son could rejoin the squad later this week.

Spurs initially reported two Covid-19 cases near the beginning of December. By Oct. 7, the outbreak had spread to six players and two members of staff, and by the end of the week, eight players were reportedly infected.


The first Tottenham fixture to be interrupted by the outbreak was the club's Europa Conference League game against Rennes last week.

Spurs pulled out of the Europa fixture because they did not have enough players to properly field a team. The decision was criticized by Rennes, who claim that Tottenham unilaterally made the decision without going through the proper UEFA channels.

The game will not be rescheduled, because a date could not be found when both sides are available before the Dec. 31 deadline. As a result, a UEFA disciplinary committee will now review how the result of the fixture will be determined.

Annex J of Europa Conference League regulations suggests that because Tottenham were responsible for the game's cancelation, Rennes are likely to be awarded a 3-0 win.

Sunday's game against Brighton was the second fixture to be canceled due to the outbreak. As a Premier League match, that game can be rescheduled later next year without too much disruption.

Spurs will be hoping to return to the pitch this Thursday for their next Premier League game against Leicester. Although those players that have contracted Covid-19 will likely still be absent, Tottenham should be able to field a side out of players that have tested negative and now returned to training.

The outbreak couldn't have come at a worse time for Son, who has just started building offensive momentum over the last week.

Son picked up his second goal in as many games on Dec. 5, hammering home an impressive piece of precision work to cap off Spur's 3-0 win over Norwich. That goal was his second that week, following a 65th-minute goal on Dec. 2 against Brentford.

Although Son may be able to return to training at the end of this week, he is unlikely to rejoin the starting squad immediately.