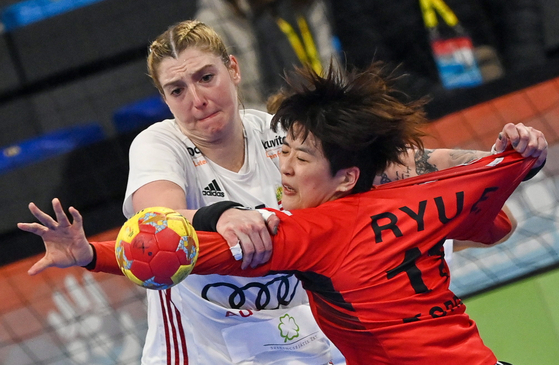 Ryu Eun-hee, right, in action against Szimonetta Planeta of Hungary during the Group Three match between Korea and Hungary at the 2021 World Women's Handball Championship in Granollers, Spain on Sunday. [EPA/YONHAP]

Korea's bid to reach the quarterfinals for the first time in 12 years had already fallen apart on Friday, when a 37-28 loss to Germany knocked them out of contention.

With just the top two teams advancing to the quarterfinals, Korea were knocked down to third at best after their loss to Germany. After dropping their last match to Hungary, Korea finished in fourth place with two wins and three losses.

In the preliminary rounds that started on Dec. 3, Korea were placed in Group F alongside Denmark, Tunisia and the Congo. After beating the Congo 37-23 and Tunisia 31-29, Korea dropped their third match against Denmark 35-23 to take the runner-up spot.

With the top three from each group advancing to the second group stage, the 24 countries were divided into four groups. Korea were placed in Group Three alongside Denmark, Germany, Hungary, the Czech Republic and the Congo. Denmark and Germany advance to the quarterfinals as the top two countries. 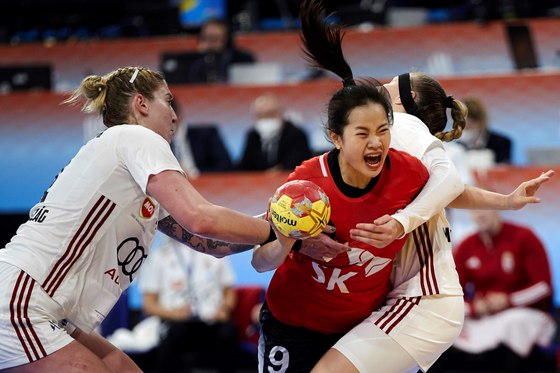 Before the Asian Championship, Korea reached the quarterfinals at the Tokyo Olympics, but missed out on a medal after a 39-30 loss to Sweden. Korea struggled in the preliminaries, losing their first match of the Games to Norway then the second to the Netherlands, before getting a win against Japan. Korea lost to Montenegro and drew against Angola. Korea advanced to the quarterfinals thanks to Japan losing to Norway.