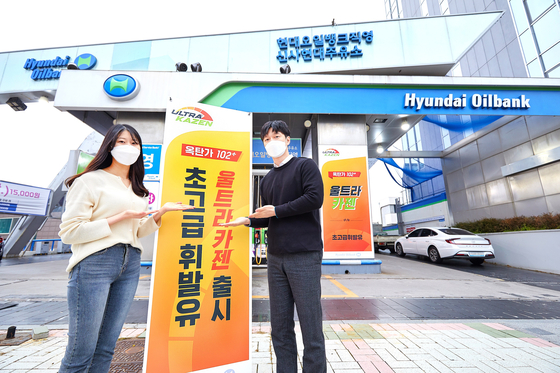 Hyundai Oilbank launched a premium gasoline called Ultra Kazen with an octane rating of more than 102.

It is the first gasoline with such a high octane rating to be retailed at local gas stations, the company said Tuesday.

Octane levels measure a fuel’s resistance to what’s called engine knock, a type of explosion that can happen inside the engine’s cylinders. Fuel with high octane ratings have less engine knocking.

Owners of imported vehicles are often recommended to use premium gasoline.

Ordinary petrol in Korean gas stations have octane ratings of between 91 and 93 and premium petrol have ratings between 99 and 100.

“With the launch of Ultra Kazen, Hyundai Oilbank is taking on a two-track strategy in the premium petrol market with its existing product, Kazen,” the company said Tuesday.

“On top of an increasing number of imported vehicles in Korea, the trend of buying premium cars and big cars is on the rise,” Hyundai Oilbank said. “Demand for premium gasoline is expected to grow in the future."

In October, SK energy launched a new version of its premium gasoline product under the name Solux plus+. It is said to be more eco-friendly, decreasing the amount of emissions generated.

Hyundai Oilbank’s Ultra Kazen will be sold at 15 gas stations across the country. The company said it will expand the number to 30 by the end of January 2022.

The pump price of premium gasoline is usually 200 won to 300 won higher per liter than ordinary gasoline. The price of Ultra Kazen will be 100 won higher than Kazen.