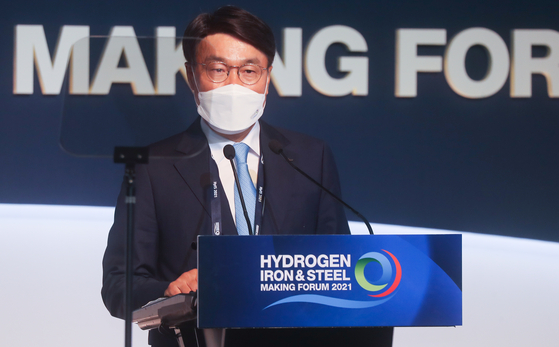 
Posco's shares declined almost 5 percent when it announced the formation of a holding company on Friday.

Analyst price targets were cut Monday, though some remain hopeful about the company's prospects if it sticks to the plan of maintaining full ownership of the steel-making business.

In the dramatic corporate makeover, Posco will form a holding company that will invest, hold shares, conduct research and development and guide ESG management.

The steel-making business will become a wholly-owned subsidiary of the holding company.

If shareholders approve of the maneuver at a meeting on Jan. 28, the plan will be put into effect on March 1.

The revamping of the corporate structure will take advantage of the stability and strengths of the steel-making business while investing into more growth-oriented areas.

Posco says it does not intend to list the steel company or its lithium, nickel and hydrogen production businesses.


Posco currently "does not require massive investment in the steel business and therefore does not face a need to sell its shares to raise funds," said Lee Jong-hyung, an analyst at Kiwoom Securities.

The steel business generates around 70 percent of Posco's consolidated operating profit. The figure is expected to break 80 percent this year.

Lee said the change in Posco's business structure differs from recent moves by a number of companies in Korea whereby profitable divisions were split off to be listed, thereby reducing the influence of the seller over the newly public company.

Once Posco's lithium, nickel and hydrogen businesses become profitable, and if the steel subsidiary remains wholly owned, "Posco's holding-company structure will become an opportunity in the mid to long term," said Moon Kyeong-won, an analyst at Meritz Securities.

But it could take some time for the new businesses to become profitable, Moon added, specifically referring to Posco's plan to begin production of lithium in 2023.

Some analysts cut their target price for Posco following the announcement Friday.

Posco share declined 4.92 percent on Friday, the day it announced the holding company structure. Its share closed up 1.95 percent on Monday, but closed down 0.52 percent on Tuesday to 288,500 won.

The National Pension Service (NPS) is Posco's largest shareholder, with 9.75 percent of the stock, followed by Citibank, with 7.3 percent. The NPS voted against the LG Chem and SK Innovation split-offs.