KT's partnership with KAIST is kicked off

KT's partnership with KAIST is kicked off 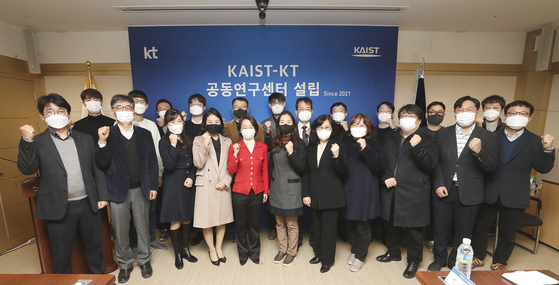 Executives at KT and faculty members of KAIST pose for photo for on Tuesday at KAIST Daejeon campus officially kicking off the partnership between the telecom company and the university. [KT]


KT will establish a joint artificial intelligence (AI) research center with KAIST in Daejeon, officially kicking off its partnership with the university on Tuesday.

Last May, KT and Kaist signed an agreement to jointly start research and development of AI and related software during a workshop for KT’s executives and KAIST’s faculty members.

The arrangement included the two parties’ cooperation on developing AI technology, establishing a research center and setting up a master’s degree course for KAIST students.

The deal officially began taking effect on Tuesday, after a congratulatory ceremony held at the KAIST Daejeon campus.

KT will fund a team of eight KAIST faculty members including Professor Ryu Suk-young, head of the School of Computing at KAIST, that will choose seven AI-related projects for the team. The projects will be centered around AI technologies to be used in people’s everyday lives.

A master’s degree course will begin next September at the new research center. After completing the AI course, graduates will be hired by KT.

KT has been making aggressive advancements in non-telecom businesses, vowing earlier this year to double its non-telecom revenues by 2025.

According to KT, companies that do not adapt to the digital era will fail to survive radical industrial change. The company will offer its technologies to local companies for a smooth transition into the future, KT President Park Jong-ook said Tuesday at a tech conference in central Seoul. 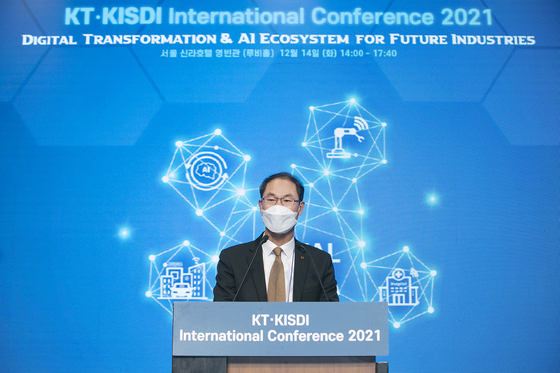 
“Digital transformation is essential for a company to strengthen its industrial competitiveness but it’s also a challenge that could end some for good,” Park said.

“KT has been adamant in going beyond our traditional telecommunication business to contribute to digital transformation by establishing the ABC infrastructure for a big change in society,” Park said. “We are certain to help Korea become a digital leader and individual companies to reshape themselves for the better.”

The conference, called “Digital Transformation & AI Ecosystem for Future Industries,” was co-organized by KT and the Korea Information Society Development Institute (Kisdi) and featured tech experts from Korea and abroad.

Companies that are pushing their own digital transformations shared their experiences, including Siemens Digital Industry Software Korea and Canadian tech company Scale AI, as well as companies from overseas such as Germany’s Fraunhofer IGD and France’s GE Healthcare.

The essence of digital transformation lies in the subversion of the work hierarchy, meaning that what used to be considered the means becomes the end, according to Huh Suk-zoon, senior vice president of the KT Institute of Economics & Business Research.

“Before the digital transformation, digitalization was a mere representation of reality,” Huh said. “But in the future, the data that is produced in the digital realm shapes the real world and even changes the business model altogether. Take the example of how Kbank and Kakao Bank have changed the way that traditional banks function.”

KT has chosen 14 fields of industry to develop its ABC technology including finance and national defense, and will be providing expertise to the government and local companies. To make sure that companies take the path, the government needs to loosen regulations and encourage companies to change themselves, Huh said.

"Local companies are aware that digital transformation is necessary, but only 30 percent are making actual efforts," he said. "The government needs to encourage companies to move toward a transition through different promotional policies. And in that process, KT hopes to be the company that helps make Korea the digital leader in the world."