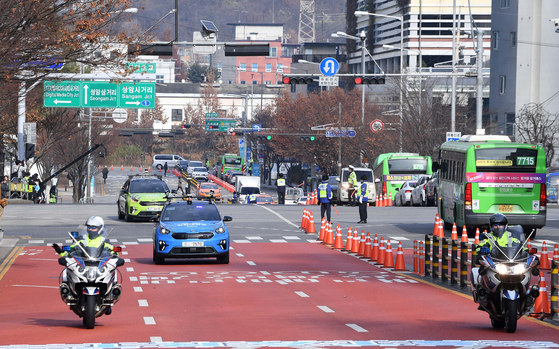 Autonomous vehicles developed by college teams tested on the roads in Mapo, Seoul, on Nov. 29. [YONHAP]

Government funding for the car business will be increased significantly in 2022, with most of the support going to R&D.

According to the Ministry of Trade, Industry and Energy on Tuesday, funding related to the automotive industry for 2022 is set at 470.9 billion won ($398 million). That is a 30.2 percent increase from this year.

R&D funding includes that related to improving battery systems to increase the range of electric vehicles (EV). The goal is 600 kilometers on a single charge by 2025.

In 2022, 59.1 billion won will be committed to third-generation EVs, an increase of 20 percent from this year; 7 billion won on parts development for future cars, up 50 percent; and 3 billion won on developing technology for recycling EV batteries.

A total of 27.6 billion won of funding will be allocated to hydrogen-fuel related mobility technology development.

Some 3.7 billion won will go toward developing hybrid systems for SUVs.

The government will commit 22 billion won to developing technologies related to environmental regulations.

Technology development is especially targeted towards major export markets, including Europe, where environmental requirements on new vehicles have been toughening.

A total of 10.1 billion won will be spent on personal mobility, such as e-scooters.

The government increased the funding next year for developing autonomous vehicles, with the goal of having level-4 self-driving vehicles by 2027.

Level 4 is just a level below fully self-driven vehicles, which do not need any human input.

The government is allocating 53.6 billion won to self-driving technologies, including infotainment and the establishment of a future car digital industry verification platform

"Early execution of the budget will help automotive parts developer whose businesses have been affected by Covid-19," said a ministry official.