A K-pop group of Korean and Japanese members growing popular in Latin America seems like an unlikely scenario, but that's exactly what is happening for rookie boy band T1419.

It hasn’t even been a year since T1419 debuted in January, but the boy band has already had an incredibly prolific 2021. It dropped four releases, won an award at the 2021 Asia Artist Awards (AAA) and became the first-ever K-pop act to be invited to Latin America’s prestigious Monitor Music Awards. Now the band is back with its digital single “Red Light, Green Light” which dropped Dec. 2.

T1419 consists of five Korean members — Noa, Sian, Kevin, Gunwoo, On — and four Japanese members — Leo, Zero, Kairi and Kio. The group of nine sat down for an interview with the Korea JoongAng Daily on Thursday.

“T stands for teenager, and 14 and 19 were the ages of our youngest member Kio and me, the oldest member, when we met and formed a team,” said T1419’s leader Noa. “Our mission is to represent the voices of teens, so we thought those numbers were fitting for our group name.” 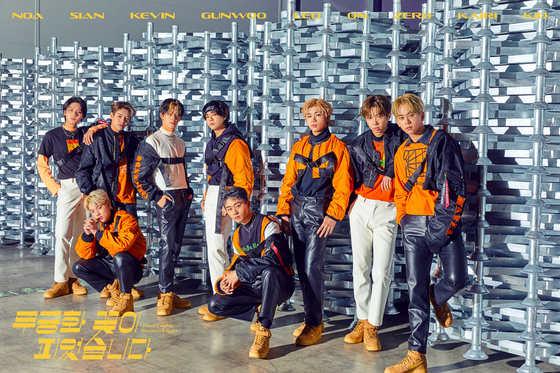 
In line with its concept, T1419’s music has been tackling heavy topics such as school bullying and materialism from a teenager’s perspective.

“We’re approaching our theme of adolescence from various angles to be the spokespeople for teenagers,” said Gunwoo. “We try to deal with as many issues as possible from a teen viewpoint and are always looking for a topic to sing about.”

“Our first [EP’s] lead track ‘Asurabalbalta’ was about ‘myself’ and searching for a ‘complete me,’” said On. “The second ‘Exit’ was about the small society of teens, which is school, and bullying that happens there. The third ‘Flex’ was about materialism in society at large. We’re expanding our range [of topics] and preparing to continue telling our story in upcoming albums.”

Some members have been part of the lyric writing process, and it helps that they are aged between 17 and 21 so that they can offer insight based on real experience. On and Noa helped write the lyrics for “Flex," while Noa worked on the lyrics for “Red Light, Green Light.”

“Lyrics for lead tracks take more effort,” Noa said. “For ‘Red Light, Green Light,’ we changed the lyrics about 20 times. It was a nerve-wracking yet unforgettable experience.”

“We often think of pursuing a dream as a challenging, painful process,” said Sian. “But in this song, we interpreted it as a fun journey going forward and enjoyable like the children’s game of the same name.” 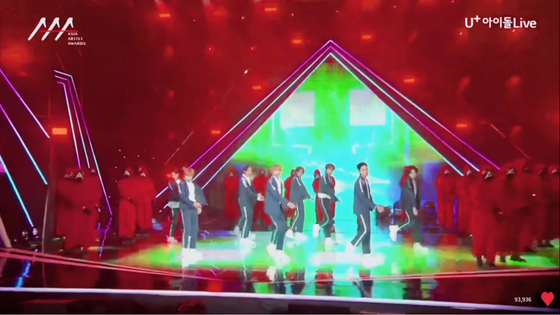 
The song is a rearranged version of the band’s unreleased song “Catch Me” (2020) which it showcased pre-debut. Both the original and rearranged versions incorporate the now-famous melody sung by Korean children while playing Red Light, Green Light — which happened to become known all across the world thanks to the hit Netflix series “Squid Game” (2021).

To pay homage to the series, the band performed “Red Light, Green Light” wearing bejeweled green tracksuits with backup dancers in pink henchmen uniforms at the AAA ceremony on Dec. 2,

“As the game received international attention thanks to ‘Squid Game,’ we thought it would be entertaining to do a ‘Squid Game’-themed performance at the AAA,” said Kevin.

T1419 were also awarded the Potential Award in the Singers Category at the ceremony. 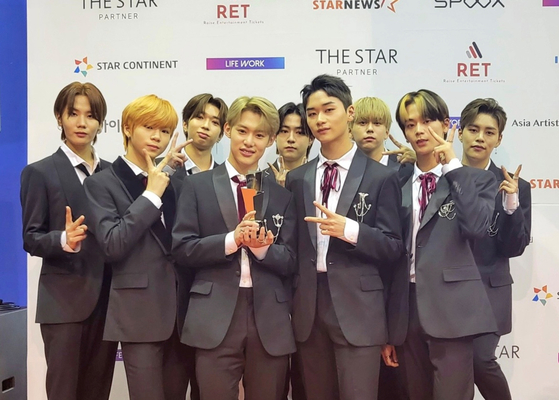 
“It was our first awards ceremony since debuting,” said On. “Mingling with so many artists and having our potential recognized was such a proud moment.”

T1419 is also known for seeing success in Latin America with a loyal and growing fan base. A visible majority of YouTube comments under their music videos are written in Spanish, which members are well aware of.

“We are getting so much support and love from Latin American fans, for which we are so thankful,” said Leo. “We show a lot of intense performances on stage, jumping over each other and what not, and I think viewers in Latin America find them eye-catching.”

“We’ve been consistently uploading a vast amount of content [on various platforms] with subtitles in many different languages, including English, Japanese and Spanish,” said On. “Maybe that’s another reason why we were able to gain Latin American fans from early on.”

Their popularity in Latin America further rose through a wholesome online interaction with Puerto Rican rapper Daddy Yankee in August. 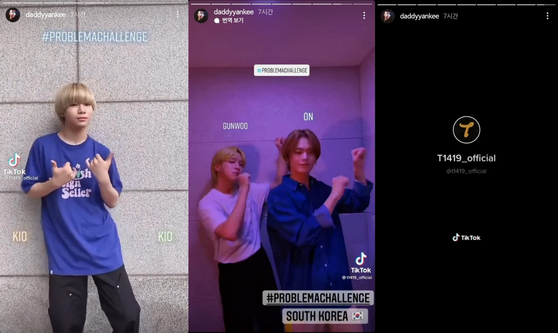 
“As we became interested in Latin pop thanks to Latin American fans, we decided to participate in a TikTok dance challenge for Daddy Yankee’s song 'Problema' (2021), which was a favorite among members,” Zero said.

Then Daddy Yankee shared T1419’s challenge video on his social media with the hashtag #SouthKorea, a move met with great enthusiasm from the boy band’s fans. T1419 later responded with a full-length dance cover video of “Problema” on YouTube, under which Daddy Yankee commented, “Thank you, the dance is great!”

In October, T1419 became the first K-pop artist to be invited to the Monitor Music Awards, hosted by Latin America’s major music chart Monitor Latino. The band performed its track “Flex” for the ceremony via a prerecorded video.

“We were very surprised to be invited,” said Kairi. “Although we had been closely communicating with Latin American fans, we never imagined we’d be asked to join the ceremony. We felt so proud and thankful. We hope we can keep meeting fans in Latin America through various ways.” 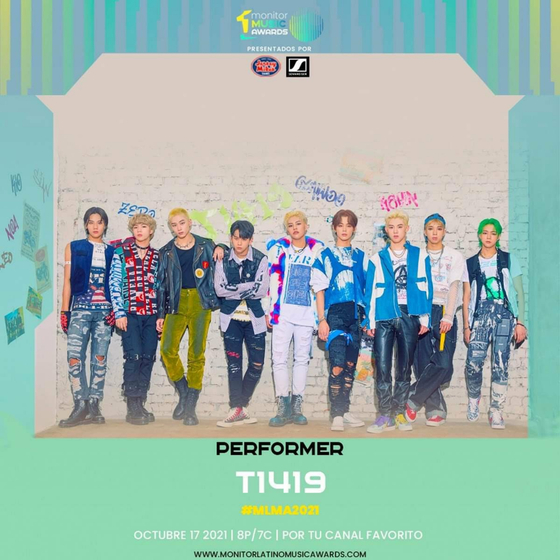 In October, T1419 became the first-ever K-pop act to be invited to the Monitor Music Awards, a prestigious awards ceremony in Latin America. The boy band performed its track “Flex” for the ceremony via a prerecorded video. [MONITOR LATINO]


The band expressed its eagerness to collaborate with Latin American artists and perhaps even drop an original Latin pop track.

“Since Latin American fans are sending us so much love, we grew to listen to a lot of Latin pop,” said On. “If we have the opportunity, we’d love to release songs in genres like reggaeton or tropical music [widely popular in Latin America] to repay Latin American fans with music that suits their tastes.”

“We are also interested in [Dominican singer] Natti Natasha’s music and many Latin pop artists, and we’re always ready to collaborate when they reach out,” said Zero.

Members of T1419 come from diverse backgrounds. The four Japanese members, who were introduced by their friends and families to the world of K-pop, came to Korea with dreams of becoming idol singers but could hardly speak any Korean.

“When I arrived in Korea, the only Korean I understood during practice was ‘one more time’ and ‘from the beginning,'” Zero said laughing. “When I heard that, I would just say ‘ne’ [“yes” in Korean] and keep practicing.”

“In the beginning, Korean and Japanese members had to communicate with body language,” said Leo. “It must’ve looked hilarious, but we were trying our best. Now, we’ve been studying each other’s languages and have no problem communicating.”

Although the Covid-19 pandemic has rendered the band unable to visit Japan, T1419’s songs and their Japanese versions have been gaining traction in the country. Kio shared a recent anecdote that he said made him grasp T1419’s rising popularity in Japan.

“My sister’s friend, who is a K-pop fan, recommended that she listen to T1419 — not knowing that her very own brother is me, a member,” he said. “My sister told me she didn’t say anything, but that it felt surreal. I think fans in Japan feel closer to us because we have four Japanese members. We hope we can be more active in Japan in the future.”


Before becoming trainees, Gunwoo was a boxer and Kevin was a fencer in school. Gunwoo almost became a full-time athlete, but after quitting due to his parents’ concerns of injury, he decided to shoot his shot at his other passion — K-pop. 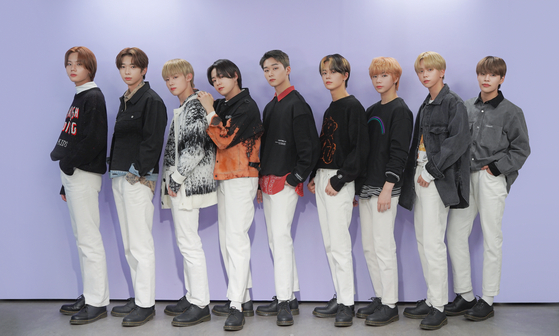 Boy band T1419 sat down for an interview with the Korea JoongAng Daily on Dec. 9. [JEON TAE-GYU]

Meanwhile, Kevin and Sian met in high school, and it was Sian who led Kevin to an audition.

“After I gave up fencing due to an injury, I thought about what else I wanted to do,” Kevin said. “I loved K-pop and ballads, so I started dreaming. Then one day Sian brought me to audition for our agency, which I passed and led me to debut as a member of T1419.”

The signature sound of T1419’s music is its intense, dramatic beat.

“Our dramatic music style suits our team in the sense that it can portray the many sides and phases of teenage life,” said Kevin. “For example, there’s a rebellious phase, the time you experience first love and when you discover your dreams in life. We want to pursue a wide range of music to best convey the messages we want to say.

Although T1419 has had a busy year, it could not help but express frustration that it hasn't been able to meet its fandom Edelweiss in person more often due to the pandemic.

“Our trainers always told us that when we stand on the stage and feel the heat from the audience, we will get excited and be able to grow more,” said Gunwoo. “The pandemic has not allowed us to fully feel that. Still, we’ve been doing our best to communicate with fans online through various platforms and content to feel closer.”

“We’re happiest when we’re on the stage,” said On. “When Covid-19 measures were relaxed recently, we had an offline performance with a small number of fans on site, and I remember it feeling so different and energizing. I hope we get more opportunities like that.” 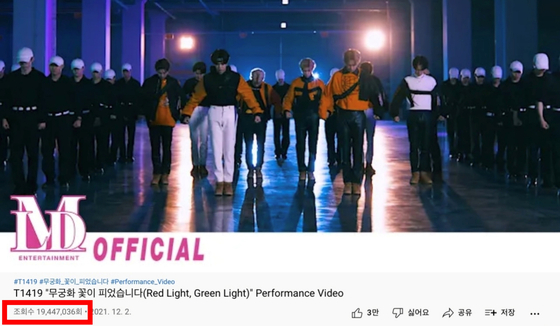 
Although the band is yet to celebrate the first anniversary of its debut, it already has a list of future ambitions.

“We certainly want to hold concerts in Japan and also perform live in Latin America where we’re receiving so much support,” Leo said.

“Above anything else, our goal is to be long-lasting artists,” said Noa. “We want to be active as long as possible without any changes in members, and we want to be a positive influence [on listeners].”

“Of course, we would also like to score No. 1s and win a bunch of awards,” Noa laughed. “We hope people enjoy ‘Red Light, Green Light,’ and we want Edelweiss to know that T1419 always loves them.”