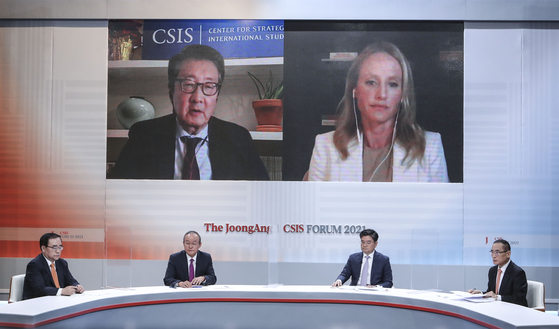 Foreign policy advisers to the main presidential candidates stressed the importance of the Korea-U.S. alliance and the trickiness of navigating the intensifying rivalry between China and the United States in the JoongAng Ilbo-CSIS Forum Tuesday.

"Simply put, the United States is our ally, and China is not our ally, it's a partner," said Wi. "From the values perspective, the U.S. and Korea share a lot of values, and as candidate Lee mentioned many times, the Republic of Korea (ROK) has maintained an alliance with the United States for the past seven decades and we have promoted the same values. By doing so, Korea was able to overcome the colonial past and become an industrialized and democratic country."

The JoongAng Ilbo held the annual international forum with Washington-based foreign policy think tank the Center for Strategic and International Studies (CSIS), the Korea Peace Foundation and JTBC. Korean and U.S. scholars and experts joined the virtual forum held at the JTBC Studio in Ilsan, Gyeonggi, to address the theme of "The Biden Era and Korea's Global Strategy," and to discuss Seoul's survival strategies in the era of Sino-U.S. confrontation, and the road to denuclearization and peace on the Korean Peninsula ahead of the presidential election on March 9.

"The U.S.-Korea alliance is no longer simply a military alliance," said Kim. "It is a comprehensive strategic alliance for all areas including new frontier areas. We go beyond just a military alliance— we have a strong partnership on all fronts." This includes strengthening cooperation in military and new technologies such as semiconductors.

However, Kim noted, "U.S.-China relations are not only based on competition, but there is also cooperation in the mixture. I believe that is a window of opportunity for Korea."

Describing the core of Yoon's foreign policy, he said, "Of course we will be rooted in our U.S.-Korea alliance, but we will need to cooperate with China based on mutual respect."

He said, "Being predictable means we can prevent the dropping of confidence in each other that comes from excessive ambiguity, and that would be the foundation for candidate Yoon's foreign policy."

Kim added, "We need to have an internal system that becomes the basis for economic security, and at the center of that should be the comprehensive strategic alliance with the United States."

The panelists said the next Korean government may need to take a clearer stand in the Sino-U.S. rivalry and also examine Seoul's difficult choices in joining or supporting American strategic alliances such as Quadrilateral Security Dialogue, or Quad, which involves the United States, Australia, India and Japan.

"As Korea has to navigate through the G2 competition, it is almost as if we are walking on the brink of a cliff, and if we make one small mistake, it may lead to a disastrous outcome," said Wi.

He noted that South Korea so far has been taking a "case-by-case stance" on China, but warned that such an approach may "not necessarily be effective" as the stakes intensify.

The DP's Lee "has a strong belief in the importance of the ROK-U.S. alliance," said Wi, adding it goes beyond security.

Wi said Lee seeks a "pragmatic approach" and "believes that U.S-China competition is as important and as urgent as the North Korea nuclear issue." He said Korea foreign policy needs to be "more aligned" with the United States.

"However, China is geographically closer to Korea, has a lot of economic ties, and may have important influence in the process of unification of the Korean Peninsula, so we need to maintain friendly relations with China," continued Wi. "Lee will like to base his position on the ROK-U.S. alliance while promoting better relations with China."

Wi said Lee believes relations with Japan needs to improve "as quickly as possible," and will prioritize this if he were elected. He likewise "understands the importance of trilateral cooperation" with Washington and Tokyo as it "serves as a deterrence to any military confrontations." Lee also "believes in the values and approaches of the U.S. Indo-Pacific Strategy," and believes that Korea, as a U.S. ally, "needs to collaborate and cooperate more actively with Quad," referring to the U.S.-led regional security dialogue.

Michael Green, CSIS senior vice president for Asia and Japan chair, said it is "very conspicuous" to the United States, Australia, Japan and India, that "Korea is not part of that team."

He added, "Korea is doing as much as any of these countries bilaterally with foreign aid, with capacity building, with diplomacy, to invest in Asia but it's doing it alone, not as a part of this grouping of middle and major powers committed to a free and open Indo-Pacific."

Green said one of the most important questions for the next Korean presidential candidate is: "Is it in Korea's interest to continue self-isolating within Asia in this way, or is it better for Korea to join this team and be part of a plurilateral effort of likeminded countries who share common interests and values with the people of Korea?"

Bonny Lin, CSIS senior fellow for Asian security and director of the China Power Project, said, "A critical question for South Korea is what position will Seoul take in a regional flashpoint involving China and one of its neighbors," such as Taiwan, Japan or in the South China Sea.

She warned, "Assuming U.S.-China relations have worsened, it's possible that inaction on the part of South Korea, could be viewed as the ROK siding with China," which could lead to "serious questioning of the U.S.-ROK alliance" within the United States.

"If Seoul walks on eggshells and keeps switching position by turning to the advantageous side, it could be targeted by both countries and fall to a shatter zone state," said Hong Seok-hyun, chairman of JoongAng Holdings and the Korea Peace Foundation, in his opening remarks. "That would make it impossible to safeguard security and the economy. In this regard, the next president's five-year term is a significant turning point which could determine the fortunes of Korea for the next 100 years."

Pointing to the low level of domestic consensus regarding foreign and security policies due to constant political feuding, Hong proposed to create a permanent consultative body within the Korean National Assembly when the new administration takes office next year to "promote consistent foreign and security policies regardless of a change in government based on national consensus that transcends political factions." 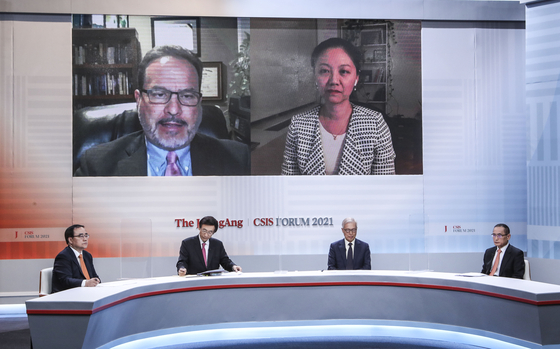 Michael Green, left, Center for Strategic and International Studies (CSIS) senior vice president for Asia and Japan chair, and Bonny Lin, CSIS senior fellow for Asian security and director of the China Power Project, join in virtually for the first session of the JoongAng Ilbo-CSIS Forum 2021 at the JTBC Studio in Ilsan, Gyeonggi, Tuesday. [KIM SEONG-RYONG]

John Hamre, president and CEO of CSIS, pointed to a strong call within America to "broaden and to refresh" the Korea-U.S. alliance.

Noting that "Korea is a global power" — despite it not seeing itself that way — he said there is room for cooperation in global public health, environment and diversifying supply chains. He said, "America's going to become a country that drives electric vehicles. But all of the car batteries are going to be Korean batteries."

Hamre added, "Korea has a huge opportunity to be a leader in the world. We need to think about how we can broaden and diversity and make more resilient the supply chains for both of our economies so that we are not dependent on choke points."

On North Korea policy, Wi said that Lee's campaign believes in a "complex solution to a complex issue" and that it will be "flexible in negotiations."

He added, "But if there is a breaking of promises, or North Korea misbehaves, we need to clearly point that out and respond to the wrongdoings."

Kim said that Yoon's campaign will not go out its way to make any sort of "big deal" and favors a "middle deal" with North Korea.

"We will engage North Korea in dialogue, and if they show us that they are willing to move in the direction of denuclearization, we can provide humanitarian aid or economic cooperation," said Kim, also signaling "flexibility." He differentiated between humanitarian support and strategic aid.

Referring to a declaration to formally end the 1950-53 Korean War, which ended in an armistice agreement, Wi said, "We need the peace track, in synergy with the denuclearization track, and so, I don't think we should view an end-of-war declaration negatively. What is important is the methodology."

One way is through the wording and expressions, he said, adding there is a need for the "appropriate caveats so that we have the synergy effect between the two tracks."

In turn, Kim expressed doubts as to whether an end-of-war declaration will help North Korea's actual denuclearization in the current circumstances.