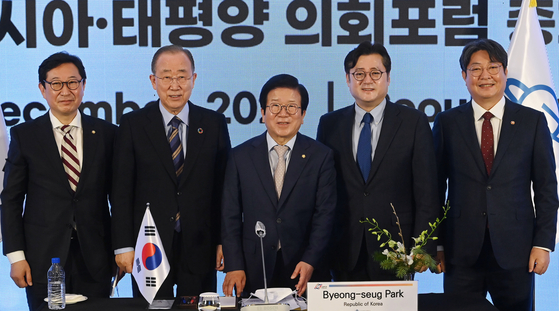 “The Korean government has been dedicating its efforts toward putting a formal end to the Korean War,” said Park Byeong-seung, Assembly speaker and also the chair of this year’s APPF, during his opening speech at Conrad Seoul in Yeongdeungpo District, western Seoul.

“I deeply appreciate the continued interest and support [to bring peace to the Korean peninsula.]”

Formed in 1993, APPF is a forum comprised of national parliamentarians from 27 member states of the Asia-Pacific region to discuss mutual concerns and promote regional cooperation.

This year’s forum was held virtually and hosted by Seoul under the theme titled, “The role of parliaments in strengthening resilience in the post-Covid-19 era.”

National parliamentarians from countries including the United States, China, Japan and Russia were in attendance online.

The forum, which began Monday, is a three-day event.

Monday’s event was focused on gender and women’s rights issues exacerbated by the Covid-19 pandemic.

Park added Tuesday that he has made public his intentions to meet with the leader of the Supreme People’s Assembly of North Korea, Choe Ryong-hae.

“I am willing to meet him anytime, anywhere, and without any conditions,” said Park.

Member states on Wednesday will undergo a final voting period on a joint communique which includes a resolution regarding peace on the Korean peninsula with references to inter-Korean parliamentary meeting and an end-of-war declaration.

Park also emphasized solidarity during the time of crisis in his opening speech, saying that “we can hope to overcome these challenges [the pandemic, economic crisis and climate crisis] only through global cooperation based on multilateralism.”

“I hope this visit can add momentum to advancing our diplomatic relationship,” said Park.

The two representatives mainly discussed their economic relations, including imports of urea — a substance that suddenly fell short and caused a national halt in diesel-fueled vehicles after China tightened its exports.

“U.S.-China competition, climate change and the Covid-19 pandemic is shaking the world economy and the global supply chain,” said Park.

“Korea is very thankful to Vietnam for helping us out during our urea shortage last month, and I hope that Vietnam can continue to be a reliable urea supplier for our country.”

Currently, Vietnam and Korea are in talks of creating a memorandum of understanding regarding urea imports. In November, Korea imported 8,200 tons of urea from Vietnam.

“Through the agreement, Koreans and Vietnamese citizens will have social insurance coverage in each other’s country,” said Hue.

Hue’s visit to Korea comes one month ahead of the two countries’ 30th anniversary of diplomatic relations. It is also the first official visit by a Vietnamese government official to Korea since Vietnam elected its new president in April. 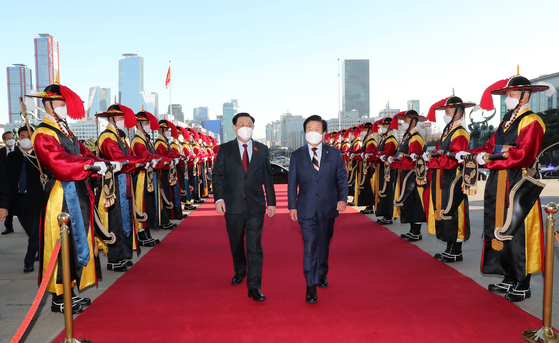