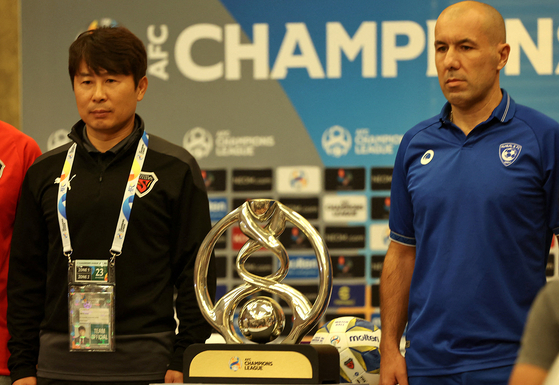 Pohang Steelers coach Kim Gi-dong, left, and Al-Hilal coach Leonardo Jardim pose with the trophy on the eve of the AFC Champions League final on Nov. 22 at the Crowne Plaza Hotel in Riyadh, Saudi Arabia. [AFP/YONHAP]


The K League will be able to send three clubs straight to the 2023 Asian Football Confederation (AFC) Champions League with an additional team starting from the playoffs, as the K League's quota was upgraded after it topped the AFC East Asian league standings released on Dec. 6.

For the last few years, Korea has had two automatic spots at the Champions League and a chance to earn one more through the playoffs. That quota was set after the K League was ranked at No. 3 in East Asia in 2019.

The standings were not recalculated last year, when the Covid-19 pandemic disrupted leagues across Asia to the extent that there was no fair way for the AFC to weigh the number of matches played.

The standings are determined based on the performance of the participating clubs of each league that have participated in the AFC Champions League or the AFC Cup over the past four years. The K League received an aggregate score of 54.7 points from 2018, 2019 and 2021. Just this year, the K League earned the most points, 22.75, among Asian leagues after K League club Pohang Steelers finished runner-up at the Champions League, while Ulsan Hyundai reached the semifinals and Jeonbuk Hyundai Motors reached the quarterfinals.


The K League has the second-most points among all Asian leagues after Saudi Arabia’s 57.3 points. Japan has the third-most points, with 53.525 points, Iran is fourth with 44.575 points and Qatar is fifth with 43.05 points.