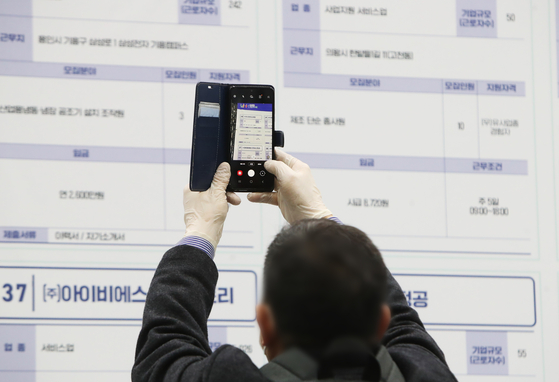 A job seeker taking pictures of job opening during a job fair held in Suwon on Dec. 2. Jobs continued to grow for nine consecutive months. However, the resurgence of Covid-19 has started to show. [YONHAP]

Total employment grew by 533,000 in November from the same month a year earlier, up 2.0 percent on year and the ninth consecutive month of growth.

A total of 27.8 million people were employed in November

"The overall job figures are improving," Finance Minister Hong Nam-ki said. "However, we will remain alert to industries and people affected by Covid-19."

The unemployment rate fell 0.8 percentage points to 2.6 percent, tied with August for the all-time low. It has been below 3 percent for four consecutive months.

The growth in health and social welfare jobs continued to lead, with 279,000 jobs added on year, an 11.6 percent increase.

A total of 148,000 more people were employed on year in logistics and storage, up 9.8 percent.

Manufacturing, which lost jobs for three months running, added 51,000 last month, a 1.2 percent increase. Exports are on track to hit a record $640 billion this year.

Employment in wholesale and retail was down 123,000, or 3.5 percent. Hotels and restaurants lost 86,000 jobs on year, employment falling 4 percent year-on-year.

In November, 175,000 fewer people were employed as daily workers, a 12.4 percent drop. The statistics agency noted that these losses are related to weakness in the restaurant business.

"Hiring at hotel and restaurant businesses increased slightly in September and October but fell in November," said Chung Dong-myung, Statistics Korea's official on job statistics. "The easing of social distancing measures with the gradual return to normalcy that started in November resulted in an increase in the number of people confirmed with Covid-19 from 2,000 a day to 3,000."

With the resurgence of Covid-19, 42,000 more people started to work alone, up 1 percent. This indicates that more self-employed businesses are firing employees.

The government job total fell 81,000 people on year, down 6.3 percent. Statistics Korea said that the drop was in part the result of the ending of some government job projects.

"Usually by December, government job projects end," Chung said. "But new application starts mostly at the end of the year, which influences the job statistics for December or January."

About 87 percent of job increases in November were for people 50 and older.

The finance minister blamed the falling number of people aged 30 to 49 for the fall in employment in the age range.