Bank employees being paid a small fortune to go away

Bank employees being paid a small fortune to go away 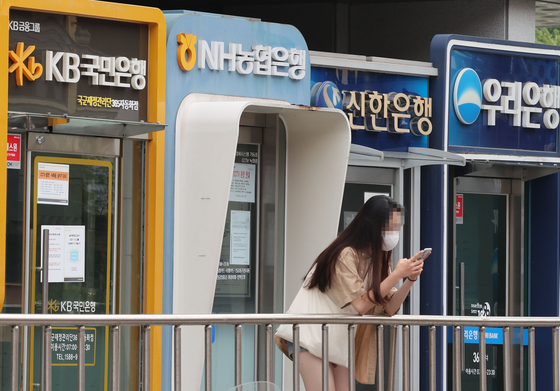 ATM machines of banks lined up in Seoul [YONHAP]

Standard Chartered Bank Korea offered voluntary retirement packages to employees in October, with 496 choosing to leave. The bank offered severance pay equal to 36 to 60 months of average wage, with a maximum limit of 600 million won ($505,800). The compensation is bigger than the maximum 38-month salary severance pay the bank offered in October last year.

KB Kookmin Bank, Shinhan Bank, Woori Bank and NH Nonghyup Bank together lost a total of 2,073 employees through voluntary retirement this year as of Tuesday, up 35 percent on year, or by 539 people.

More bank employees are willingly leaving their companies as the banks offer better compensation. Banks are taking early retirement resignations even from younger employees, widening the scope of eligible applicants.

KB Kookmin Bank in January offered voluntary retirement programs to employees born between 1965 and 1973, allowing people as young as 49 to apply. That allowed more to retire, compared to the age limit of between 1964 and 1967 a year ago.

Busan Bank in November accepted voluntary retirements from employees who worked 10 years or more, which allowed employees in their 30s to apply. 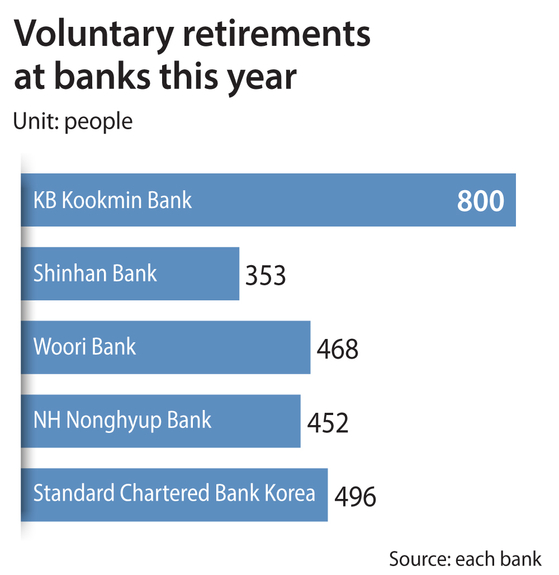 Companies normally downsize their workforce when they are financially struggling, but banks have been doing so despite good profits.

"Banks achieved record-breaking earnings this year, and early retirement benefits offered by the four major banks will become better," said a spokesperson for one of the banks.

A labor union representing workers at KB Kookmin Bank, Shinhan Bank, Hana Bank and Woori Bank is currently negotiating voluntary retirement benefits for January next year, and compensation is expected to be bigger than this year's.

"Earnings of banks greatly improved this year, and they can cope with retirement package costs," said Lee Min-hwan, a professor of international finance at Inha University. "They can't guarantee next year's performance considering loan amount regulations and a possible decrease in apartment transactions, and will take more voluntary retirements at end of year and early next year."

Many banks are shutting down branches and offering services online, which makes labor cuts more attractive. According to the Financial Supervisory Service, there were 3,546 bank branches in 2020, down 6.3 percent on year.