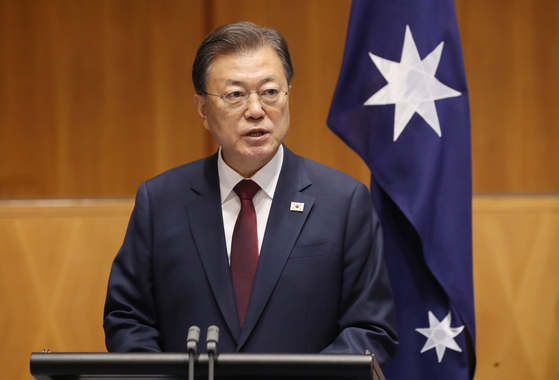 Korean President Moon Jae-in said he is not considering a diplomatic boycott of the Beijing Olympics at a joint press conference with Australian Prime Minister Scott Morrison in Canberra on Monday. [YONHAP]


South Korea has a “duty and obligation” as the host of the preceding Winter Games to take interest in the Beijing Olympics next February, said a Blue House senior official Wednesday, but will make a decision at a later date on whether President Moon Jae-in will attend the opening ceremony.

Addressing the U.S.-led Olympic diplomatic boycott issue, Park Soo-hyun, senior presidential secretary for public communication, said in an interview with Yonhap News TV, “As the host nation of the previous Winter Olympics, it is our duty and obligation to take a special interest in next year's Beijing Olympics.”

Washington’s diplomatic boycott of the 2022 Beijing Olympics is proving to be yet another dilemma as Korea and other American allies face increasing pressure to take a clear position on issues that divide the United States and China amid their intensifying competition.

Seoul has stressed its role as host of the 2018 PyeongChang Winter Olympics, which prompted sports diplomacy with Pyongyang and led to a de-escalating of tensions and a period of détente on the Korean Peninsula.

Moon said in a press conference on a state visit to Australia Monday that Korea “is not considering a diplomatic boycott of the Beijing Olympics, nor have we have received any request from the United States or any other country to take part.”

The United States announced last week a diplomatic boycott of the Beijing Olympics to protest China’s human rights issues, meaning U.S. officials, including President Joe Biden, will not attend, though American athletes may still compete in the Games. U.S. allies including Australia, Britain, Canada and New Zealand immediately joined the diplomatic boycott, and other countries are reviewing similar measures.

When asked on Moon’s remarks that Seoul is not considering a diplomatic boycott of the Beijing Olympics and whether the decision will have an impact on the Korea-U.S. alliance, the U.S. State Department reiterated it has "informed" its allies about its decision.

“We have certainly consulted with our allies and partners about the best-informed decision, but I can’t speak for them at this time,” said Jalina Porter, a deputy spokesperson of the U.S. State Department, in a briefing Monday in Washington. “And we’ve also made this decision based on the [China’s] egregious human rights abuses and atrocities in Xinjiang.”

“The United States has declared a diplomatic boycott, but that doesn't mean we are under pressure to join,” said Park in the Wednesday interview. Confirming Washington shared its boycott plans with Seoul ahead of its announcement, Park said he doesn’t “view it as a request to partake in it.”

He added, “I believe the United States understands very well our position” as the host country of the preceding Winter Games.

When asked if Moon will attend the Olympic opening ceremony in person, Park said a “prediction can’t be made for now,” adding that a decision is “likely to be made at a later date taking into comprehensive consideration various factors at that time.”

The Beijing Olympics has been seen as a possible venue to revive stalled diplomacy with Pyongyang and bring the North to the dialogue table.

“It is our principle that a decision on this issue should be made thoroughly considering Korea’s national interest,” said Park. “We have the experience of the PyeongChang Olympics previously becoming a venue of peace at a time of grave danger due to North Korea’s nuclear and missile provocations.”

He added Moon would have taken such factors “into consideration.”

Regarding Moon’s proposal for a declaration to formally end of the 1950-53 Korean War, which ended with an armistice agreement, Park said, “It is a matter that has already been agreed upon between the related parties.”

He said, however, “there is no timeframe or road map” for an end-of-war declaration, adding it could be “at the Beijing Olympics, after it, or even before,” stressing that momentum can be made once the key players, especially Pyongyang and Washington, agree to sit down for talks.