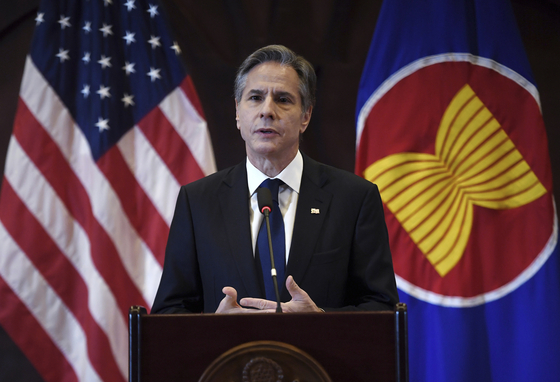 
U.S. Secretary of State Antony Blinken emphasized the American commitment to the Indo-Pacific, highlighting the American alliances with regional powers including Australia, Japan and Korea during his address at the Universitas Indonesia in Jakarta on Tuesday.

“We will forge stronger connections within and beyond the region,” said Blinken in highlighting several key U.S. objectives in the Indo-Pacific. “We’ll deepen our treaty alliances with Japan, the Republic of Korea, Australia, the Philippines and Thailand.

“Those bonds have long provided the foundation for peace, security and prosperity in the region. We’ll foster greater cooperation among these allies as well,” he said, adding that Washington will find ways to “knit our allies together with our partners,” pointing to the Quadrilateral Security Dialogue, or Quad, as an example.

Blinken was speaking at the same venue where Robert F. Kennedy spoke nearly 70 years ago, when he visited the university as the U.S. attorney general on Feb. 14, 1962.

“It seems to be the United States' intention to emphasize that the alliances are bound by treaties,” said Shin Beom-cheol, director of the Center for Diplomacy and Security at the Korea Research Institute for Economy and Society, a Seoul-based think tank, in speaking with the JoongAng llbo on Wednesday. “As the two countries have already agreed to jointly respond to armed attacks in the Pacific region as per the Mutual Defense Treaty, this means that the Korea-U.S. alliance, which was centered on the Korean Peninsula, will essentially be expanded to cover the Indo-Pacific region.”

The summary of the secretary’s address, released originally in English by the State Department on Monday, was translated into Korean and shared by the U.S. Embassy in Korea within a few hours of the secretary’s delivery in Jakarta.

“The Administration’s high-level engagements with the region demonstrate the importance of the Indo-Pacific to the United States and globally,” reads the summary, which emphasizes that the first leaders that U.S. President Joe Biden met with since he assumed office in January were those from Japan and Korea. Biden met with Indonesian President Joko Widodo last month.

“We are also strengthening our strategic relationships with other regional partners, including through the Mekong-U.S. Partnership, just as we are connecting our relationships in the Indo-Pacific with our unmatched system of alliances and partnerships beyond the region, particularly in Europe,” reads the summary.

The idea of bridging U.S. allies with its partners was a recurring theme throughout Blinken’s address at the university.

“We’ll find ways to knit our allies together with our partners, as we’ve done by reinvigorating the Quad,” he said. “And we’ll strengthen our partnership with a strong and independent Asean.”

This emphasis is not surprising given the ongoing U.S.-China rivalry in the region, according to some experts.

“The United States is concentrating on institutionalizing and consolidating cooperative relations between its allies in the Indo-Pacific region,” said James Kim, researcher at the Asan Institute for Policy Studies, another Seoul-based think tank. “Its message is that the United States has firmly put its roots down in the region as an Indo-Pacific nation, ready to counter China’s influence in the region.”

“The United States has long been, is, and always will be an Indo-Pacific nation,” Blinken said during the address.

Though he emphasized that the U.S. commitment to the region is not about competing with any other power in the region, he did comment directly on Beijing’s “aggressive actions.”

“There is so much concern, from northeast Asia to southeast Asia and from the Mekong River to the Pacific Islands, about Beijing’s aggressive actions, claiming open seas as their own, distorting open markets through subsidies to its state-run companies. […] Countries across the region want this behavior to change,” he said.

Topics surrounding the Quad and Taiwan — touchy issues with the Chinese government — were also brought up by the secretary.

“We and other countries, including South China Sea claimants, will continue to push back on such behavior,” Blinken said. “It’s also why we have an abiding interest in peace and stability in the Taiwan Strait, consistent with our longstanding commitments.”

Although Blinken emphasized that Washington was “putting Asean’s centrality at the heart of our work with partners,” it was the secretary’s first visit to Indonesia since Biden took office in January.

Blinken’s trip to the region also includes visits to Malaysia and Thailand, which were dubbed “essential components of the Biden-Harris administration’s Indo-Pacific strategy” by the State Department in its regular press briefing prior to Blinken’s trip.

The Biden administration’s Build Back Better World, an initiative that’s largely been reported as a U.S. counteroffer for nations considering China’ Belt and Road Initiative, was also offered to its partners in the region during the secretary’s address.

“The region has told us loud and clear that it wants us to do more,” he said. “We intend to meet that call.”

Traveling to Korea this week from the United States is Jose W. Fernandez, the under secretary for economic growth, energy and the environment. He will be meeting with Korea’s Second Vice Foreign Minister Choi Jong-moon on Wednesday and take part in the regular Korea-U.S. meeting on economy, the Senior Economic Dialogue.