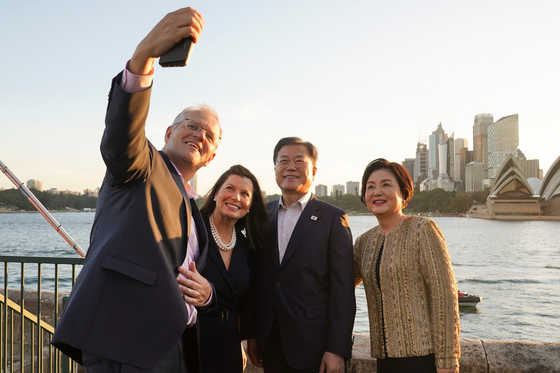 In their joint statement, the two leaders recognized that the “strong strategic, economic and people-to-people ties that have developed between Australia and the ROK [Republic of Korea] are not only of mutual benefit, but contribute to our common vision of an open, inclusive, and prosperous Indo-Pacific region.”

The two countries mark the 60th anniversary of diplomatic ties this year, and Moon was the first foreign leader to be invited to Australia on a state visit since since the outbreak of the Covid-19 pandemic.

The statement said the two countries as major trading nations recognize “that the stability of the Indo-Pacific depends on adherence to international law in the maritime domain, including in the South China Sea.” They also underscored that disputes must be resolved peacefully, in accordance with international law, and reaffirmed the importance of upholding freedom of navigation and overflight.

The statement did not directly call out China, but the issue of rising Sino-U.S. tensions was looming throughout the summit and joint press conference as Korea tries to maintain a balanced diplomacy.

Australia has been a top U.S. security ally in the Indo-Pacific, participating in the Aukus, Quad and Five Eyes, regional groups seen to keep China in check. It also joined a diplomatic boycott of the upcoming Beijing Winter Olympics. Korea in turn has avoided joining such U.S.-led groupings that appear to alienate China.

The joint statement also called for the “full implementation” of relevant UN Security Council sanctions resolutions on North Korea, while “affirmed that diplomacy and dialogue are essential to achieve the complete denuclearization and establishment of permanent peace on the Korean Peninsula.”

In economy, the two sides agreed to develop and commercialize clean energy technologies to reduce emissions and also agreed to the stable supply of raw and critical minerals.

The two countries will strengthen cooperation in resources and energy with a new memorandum of understanding (MOU) on critical mineral supply chains.

Australia is known for its rich resources including nickel, cobalt and lithium, essential for rechargeable batteries. Korea sees Australia’s critical minerals as being complementary to its goals to bolster its global competitiveness in rechargeable batteries, electric vehicles and semiconductors.

The two countries have both declared goals to achieve carbon neutrality by 2050 and signed an MOU on a low and zero emissions technology partnership. They focused on initiatives to supply clean hydrogen and for Australia to share its carbon capture, use and storage emissions reduction technology.

The two sides will cooperate on eco-friendly technologies to build a hydrogen economy and create new industries and jobs. They further agreed to digital, cyber and space cooperation, as well as efforts for Covid-19 recovery.

Later Monday, Moon visited the Australian National Korean War Memorial in Canberra to honor soldiers who died fighting alongside South Koreans in the 1950-53 Korean War. He had dinner Monday night with Australian veterans and their families to express appreciation for their sacrifices.

In Sydney on Tuesday, Moon met with opposition leader Anthony Albanese of the Australian Labor Party and asked for the country’s support on the Korean Peninsula peace process and had a state dinner hosted by Morrison.

He also met with Australian business leaders and called for greater cooperation in securing a stable supply chain for critical minerals.

“If our two countries firmly join hands in good faith, we will be able to make significant contributions to hastening global supply chain stability and carbon neutrality,” Moon told the business people in Australia’s mineral industry.

Korea is the third largest market for Australia’s mineral exports, while Australia supplies nearly half of Korea’s total mineral imports.

The two countries’ bilateral trade is expected to surpass the $40 billion mark for the first time this year, said the Blue House.

In a Facebook post before leaving Sydney, Moon wrote, “Australia and Korea have grown into major countries in the international community to the point of being invited to the G7 together last year and this year. Our two countries will overcome the Covid-19, the climate crisis and supply chain instability and lead new changes.”

Moon was set to return to Seoul late Wednesday, concluding the first state visit by a Korean president to Australia in 12 years. 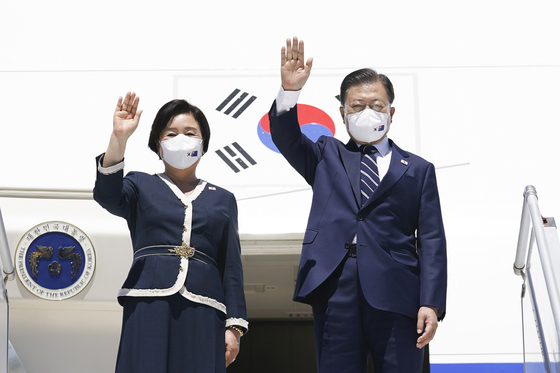