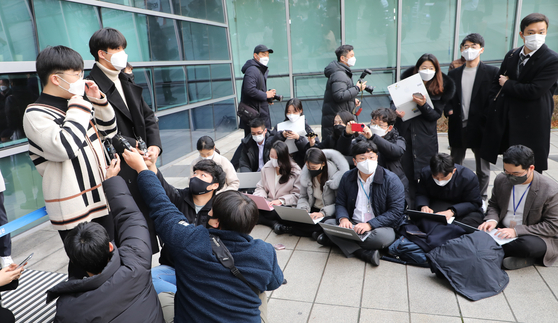 Students who filed for an injunction against the Korea Institute for Curriculum and Evaluation answer reporters' questions Wednesday in front of the Seoul Administrative Court in Seocho District, southern Seoul, after the court ruled in their favor and canceled a question on the college entrance exam for being erroneous. [YONHAP]


A Seoul court on Wednesday ruled in favor of the students who filed a suit against the national college entrance exam administrator, saying that a question on the 2022 test "contains a clear fallacy that hinders examinees from answering the question at all."

“Telling the students to choose the fifth answer [the state-given correct answer] for the multiple choice question would be equivalent to telling them to ignore the principles of biology as well as a part of the question that they were provided with,” said the Seoul Administrative Court.

“Therefore, the court rules that there cannot be a meaningful difference in the academic ability between students who picked the fifth answer and those who did not.”

The ruling to cancel the question on the College Scholastic Ability Test (CSAT) will take immediate effect, and students' scores will be made available from 6 p.m. Wednesday on the Korea Institute for Curriculum and Evaluation (KICE) website.

Due to the delay from the trial, enrollment processes at Korean universities have been postponed two days as well.

The deadline for acceptance announcements for early admission students will now be Saturday.

Upon hearing the ruling, Kang Tae-joong, head of KICE, made public his resignation from the institution.

“I feel heavy responsibility for the recent issue,” said Kang.

Answers to the test questions were made public not long after students finished their exam, but before releasing students' results.

Thirteen days prior the ruling, 92 examiners had filed an injunction to the Seoul Administrative Court against KICE, saying that a bioscience question in this year’s CSAT held inconsistences that prevented the test takers from deducing the answer deemed correct by KICE.

The court had suspended results of the exam until the hearing Wednesday.

Accordingly, the exam results, which were supposed to be posted Dec. 3, were postponed for 6,515 students who were administered the bioscience test.

The problem in question asked the test takers to find a population group that maintains a state of equilibrium under the Hardy-Weinberg principle, but examiners of the test argued that the question was unsolvable because the conditions set by the question were inconsistent.

KICE had accepted the students’ claims about the error in the question but remained that their test was valid, essentially stating that the question still could have been answered correctly regardless.

“Though the conditions presented by the question were erroneous, we still think that it was a valid question that can evaluate the students’ knowledge,” said an official from KICE on Dec. 6.

In an attempt to fight back, the students who filed for the lawsuit reached out to experts for their support.

Jonathan Pritchard, a renowned scholar in the field of population biology and a professor at Stanford University’s department of genetics and biology, agreed via Twitter with the students who said that the question was unsolvable.

Pritchard shared a screenshot of his attempt at solving the question on Saturday with a post that read, “This story has it all: population genetics, a high stakes college entrance exam, a mathematical paradox, and a court injunction.”

At a press conference after the ruling, KICE admitted its mistakes and said that it will not appeal.

“It seems that the test reviewers disregarded conditions that were unnecessary to solving the problem,” said Kim Dong-yeong, director of CSAT at KICE.

“We will not appeal as we don’t wish any more delays to the students’ university enrollment process.”

While this is the seventh time that the CSAT has come under fire for an erroneous question, the resulting delay is the first since the exam began to be administered in 1994.