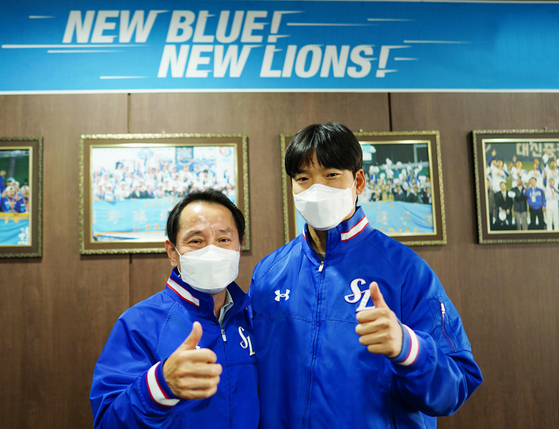 Baek Jung-hyun, right, poses for a photo after signing a four-year deal with the Samsung Lions. [SAMSUNG LIONS]


Free agent pitcher Baek Jung-hyun has opted to stay with the Samsung Lions, signing a four-year deal worth 3.8 billion won ($3.2 million) on Wednesday.

"Negotiations were not an issue," Baek said after signing the contract. "I've dreamed of signing a free agent contract with the Lions since I was a rookie. I will always do my best for the club. I sincerely thank the fans and the Lions for making me who I am today."

Baek was the only free agent to sign a contract Wednesday as of press time. His deal follows a busy day on Tuesday, when Park Hae-min signed a four-year contract with the LG Twins and Park Kun-woo inked a six-year deal with the NC Dinos. The two outfielders were two of the biggest names in this year's free agent market.