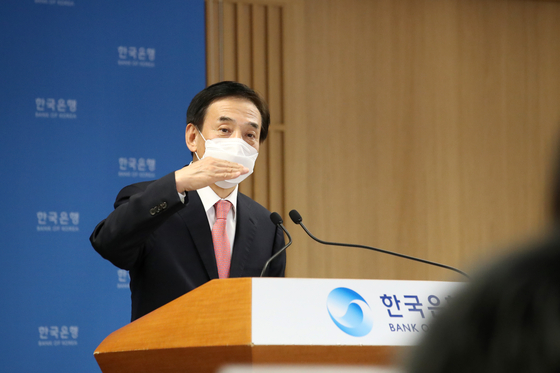 
Bank of Korea Gov. Lee Ju-yeol reaffirmed Thursday that another interest rate increase will come in the first quarter next year, adding that he expects inflationary pressures to continue to strengthen.

"There is no change in policy direction," Lee said during a year-end press briefing held Thursday. "Considering the country's economy, consumer prices and overall financial situation, there is a need to normalize rates."

When asked whether the base rate increase will come in January or February, he said "it is hard to know as the board does not schedule it in prior, however we maintain that there is a need in the first quarter."

On concerns whether the Korean central bank has been too fast in upping rates, compared to the U.S. Federal Reserve, Lee said normalizing rates from the pandemic level should primarily depend on local situations, though the central bank will take note of the Fed’s policy decisions.

"We raised rates twice because the board agreed normalizing rates cannot be pushed back," Lee said. "We now can be more flexible with the speed of adjusting our monetary policies as we moved a step faster when we could."

The Korean central bank raised rates in August and November, each by 25 basis points, to bring the country's base rate to 1 percent. The U.S. Fed during its latest Federal Open Market Committee meeting that ended Wednesday decided to hold the rates at between 0 and 0.25 percent, but double the speed of its tapering of asset purchases to fight inflation.

Lee said the Fed starting to speed up its monetary tightening will not have a big impact on the Korean market as the movement is already expected. Lee said he expects three rate increases to be made by the Fed next year.

Despite concerns about inflation and recent spike in Covid-19 cases, Lee said he doesn't think projections for the country's economic growth this year should be adjusted, though strengthened social distancing measures at the year-end could affect consumption.

The bank projected 4 percent growth for this year.

"Energy prices are likely to stay high affected by conflict between major countries and extreme weather events, while supply chain bottlenecks are lasting longer than expected," Lee said. "The global transition to a greener economy could also give rise to so-called greenflation, costs associated with going green pushing up prices."

Lee said that there could be a time lag, but over time raising rates will cool down inflation and ultimately contribute to stabilizing prices.