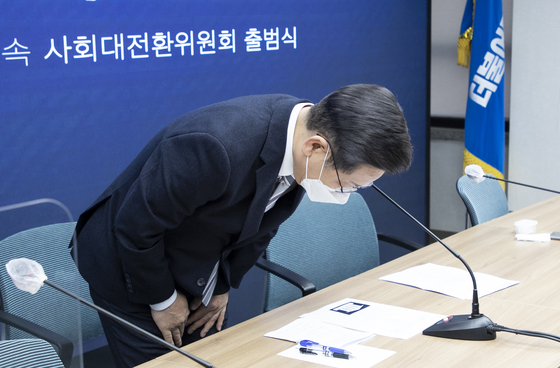 The candidate released an apology through a press release Thursday morning, acknowledging that his 29-year-old son had engaged in illegal gambling on multiple occasions from 2019 until last year.

“I apologize for my son’s wrongdoings,” the candidate said. “I failed as a parent to properly teach my child.”

Online gambling is strictly illegal in Korea, and while lotteries, horse racing, boat racing and cycling are legal forms of gambling in the country, casino gambling is mostly prohibited, with only one of the country’s 23 land-based casinos open to Koreans.

The candidate added that his son “deeply repents of his actions” and said that he told his son that “rightfully assuming responsibility is the way to lessen that misery.”

Lee was forced to acknowledge his son’s gambling habit after a news report by the major conservative newspaper Chosun Ilbo revealed that the first 13 letters of an e-mail address tied to an online poker website user ID, which translates to “I want to win,” were identical to the one tied to Lee’s son’s Instagram account.

“I want to win” posted more than 100 comments detailing his online and offline gambling exploits on the website, whose server is based in the United States.

Not only did Lee’s son write that he visited an illegal gambling den in Sinchon-dong, western Seoul, in May 2019, he also uploaded a series of reviews for similar illegal offline gambling venues beginning in June that same year.

“I go to a different gambling location each time. I go to Apgujeong, Konkuk University, Wangsimni, Sillim and Bundang,” he wrote. “If I go to the same place often, the tension loosens up and my edge disappears.”

The Chosun Ilbo report was able to corroborate the match between “I want to win” and Lee’s son using contextual information he left in his comments on the website.

“I want to win” also described himself as a “SKY graduate,” using the acronym for the elite university trifecta of Seoul National University, Korea University and Yonsei University. He also wrote in August 2019 that he would be representing his school at a cyber-competition between Yonsei and Korea.

Lee’s son was the representative from the Korea University side selected to compete in a match of Starcraft, a video game by Blizzard Entertainment that has remained especially popular in the country since it was released in 1998.