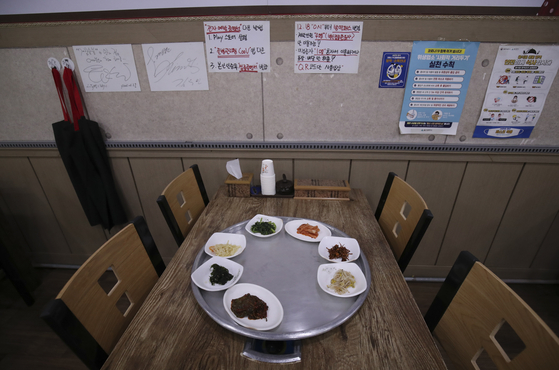 Signs explaining that gatherings will be limited to four vaccinated people starting Saturday are posted at a restaurant in Nam District, Ulsan, Thursday. The government announced earlier that day renewed social distancing measures limiting private gatherings and implementing nighttime curfews on restaurants and other businesses set to for the next two weeks until Jan. 2. [NEWS1]

Korea will limit private gatherings to four people nationwide and restore a nighttime curfew on restaurants and many other businesses starting Saturday, putting a moratorium on the living with Covid-19 scheme.

Prime Minister Kim Boo-kyum announced Thursday that the government is restoring its stricter social distancing measures including limiting operating hours to 9 p.m. for restaurants and cafes and 10 p.m. for many other businesses considered less risky, including movie theaters.

The renewed strict social distancing measures come 45 days after easing them, and will be implemented from Saturday to Jan. 2.

Restaurants and cafes will be restricted to up to four vaccinated people per group. Unvaccinated persons will either have to dine alone or opt for take-out or delivery.

Bars, nightclubs and other entertainment venues will also have a 9 p.m. curfew.

Currently, private gatherings are limited to six people in the Seoul metropolitan area and eight elsewhere.

Businesses considered to be of less risk, such as movie theaters, concert halls, internet cafes and hagwon (private academies), will have to limit operating hours to 10 p.m. However, hagwon for university admissions purposes and related to students’ studies were an exception.

The decision was made in a meeting of the Central Disaster and Safety Countermeasures Headquarters, who differentiated between businesses where masks can be worn and those where they cannot, such as if eating is involved.

The prime minister stressed that rather than calling this a U-turn of the "Living with Covid-19" scheme, it is instead being put on a pause in order to keep in check the spiking number of critically ill patients and to procure more hospital bed capacity.

There were 20 new Omicron variant cases, putting the total infections related to the new variant to 148.

The latest measures come as health authorities warned that daily coronavirus cases could spike to 10,000 this month.