'Music Dabang of Memories' brings retro back to Seoul

'Music Dabang of Memories' brings retro back to Seoul 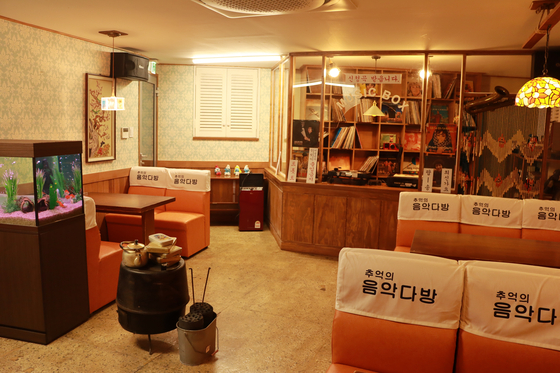 
There is a new kid in town that will likely bring back memories for people in their 50s and 60s while also attracting wide-eyed youngsters curious about Korea’s old-school cafes.

Decorated with various retro-style props, Music Dabang of Memories serves as a place that brings back the old-school analogue sentiment and creates harmony across generations through music, the city explained.

During the afternoons every Friday to Sunday, a DJ takes song requests or short stories from visitors and plays or shares them at the “DJ Music Box,” equipped with more than 500 LPs. Anyone can make a request or submit a short story using the sticky notes placed on each table. Selected songs and short stories will be broadcast throughout the museum village during the DJ hours.

Although it opened with the concept of a cafe, the Music Dabang of Memories doesn’t sell food or beverages. Visitors can, however, bring in consumables purchased from other restaurants and cafes in Donuimun Museum Village.

Music Dabang of Memories is open from 10 a.m. to 7 p.m. every day, and there is no admission fee but it does require a vaccine pass or a negative PCR test result for entry. Only visitors who receive an entrance wrist band after getting their temperature checked and scanning their QR code will be allowed to enter.

To celebrate its opening, the city will hold a promotional event in which it selects 50 people who posted a photo taken at the Music Dabang of Memories on Instagram to send a virtual gift card for a hot chocolate to. More information is available on the Seoul Metropolitan Government's Culture Headquarters Instagram account (@seoulcity_culture).

“We hope the [older generation in their 50s and 60s] can relive their nostalgic memories and the younger generation enjoy unique experiences at the Music Dabang of Memories,” Joo Yong-tae, head of the Culture Headquarters, said. “Seoul City will come up with a variety of programs in Donuimun Museum Village that can be enjoyed by all generations.”