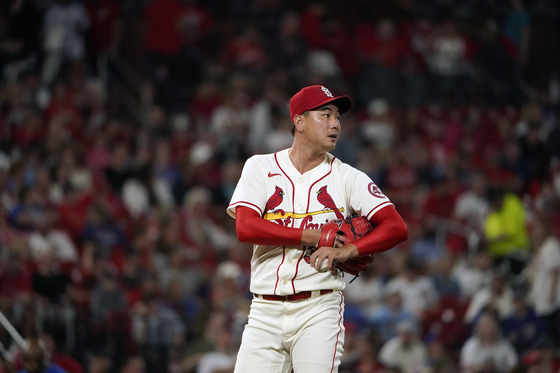 Kim Kwang-hyun, then of the St. Louis Cardinals, pauses on the mound before throwing the first pitch in the sixth inning of a game against the Chicago Cubs in St. Louis, Missouri on Oct. 2. [AP/YONHAP]


MLB free agent Kim Kwang-hyun may not have received an offer to return to the St. Louis Cardinals for the 2022 season yet, but he still remains a serious major league prospect. Although Kim isn't likely to be landing any huge contracts, major U.S. sports outlets still predict a deal is on the horizon for the Korean ace.

Kim joined the Cardinals in 2020 after a hugely successful career in the KBO that saw him named MVP at age 20 and win four Korean Series with the SK Wyverns. After two seasons in the majors, Kim has a solid MLB career 2.97 ERA with 10 wins and seven losses, solid numbers that suggest he'd be a reliable addition to any rotation.

But Kim is also 33 years old and injuries have been an issue for him in the past — he spent the end of the 2021 season in the Cardinals bullpen in an attempt to rest his elbow after concerns of soreness. That, combined with a fairly high number of walks, makes him an FA pick requiring some additional thought.

That doesn't mean Kim won't be able to pick up an MLB contract, however. Over the last few days, a number of top U.S. media organizations have speculated on Kim's next destination, rating him among the top FA prospects in the majors.

Sports Illustrated on Wednesday placed Kim at No. 16 on a revised free agent ranking, predicted that he would find a new home with the Philadelphia Phillies.

"Philadelphia has a much worse infield defense than the Cardinals do, so Kim’s performance could decline if he signs with the Phillies," the Sports Illustrated article noted. "But they certainly need pitching help, and the ’08 Olympic gold medalist has the résumé and surface-level results to improve the rotation."

The Athletic also highlighted Kim as a possible pick for the Pittsburgh Pirates, who are working to bolster their pitching staff during the offseason.

Kim wasn't given a shining review by The Athletic — he was included in the "Affordable, for better or worse" category — but he is a realistic choice in an FA market where a lot of the biggest pitching names have already gone. And while Kim may not be throwing bullets, The Athletic did note that he is a workhorse.

"After a solid 12-year career in Korea, Kim signed a two-year, $8 million deal with the Cardinals in 2019," The Athletic article said. "His 106 2/3 innings last season were second most on the Cardinals staff."

With the MLB currently in lockout pending a new collective bargaining agreement, Kim likely has some time to wait before he is able to put pen to paper with a new club. Given that the FA market is currently effectively frozen, the Korean ace has no reason to panic. There is still plenty of time for a major league club looking for a veteran arm with a solid four-pitch arsenal to reach out and give Kim another shot at the big leagues.