Third installment of 'Kingsman' series takes another step back in time

Third installment of 'Kingsman' series takes another step back in time 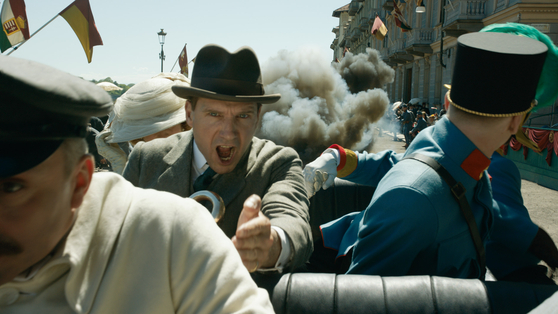 Ralph Fiennes as Oxford, the founder of the secret spy agency Kingsman in the upcoming film "The King's Man." [WALT DISNEY COMPANY KOREA]


If the previous “Kingsman” franchise was all about gentlemen spies clad in suits and ties, flaunting their latest gadgets to fight the bad guys — the third installment of the Kingsman series takes a step further back in time. “The King’s Man” is set in 1919 with swordfights and pistols, and parachutes are considered high-tech.

As Harry (played by Colin Firth) explains to Eggsy (played by Taron Egerton) in the first film “Kingsman: The Secret Service” (2014) the secret spy organization was formed in 1919 due to the tragedy that its founder Oxford (played by Ralph Fiennes) experienced. The upcoming “The King’s Man” is an origin story of how the elite secret association came to be.

“The key difference [compared to the prior two films] is that it goes back in time to tell the story of how the Kingsman independent intelligence agency started,” Fiennes explained during an online press conference with Korean media outlets on Friday. “So the key difference is that it is set in a recognizable historical era, the early 20th century just prior and during the first World War. The big difference is that it includes real historical figures — the czar of Russia, the kaiser of Germany, the king of England, the priest Rasputin, and Archduke Franz Ferdinand. [...] I think the same fun ingredients that I admire in the first Kingsman film are here. You go back in time, you go to a very particular historical era and Matthew was being inventive with that was how the Kingsman agency started.” 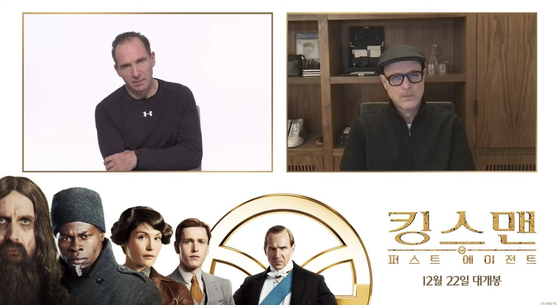 
Director Matthew Vaughn said he found himself particularly interested in this historical era as he was writing the script for the latest film.

“When I was reading [about history] I wasn’t very good at school, student-wise, so I as started reading more and more about World War I, I felt there were a lot of lessons that the public and myself could learn from looking back in history, whether it’s choosing your leaders wisely and to quote Oxford ‘little things can turn into big problems very quickly,’” Vaughn said. “I think that’s happened or is happening [right now [...] There were a lot of things that happened 100 years ago which are some of the problems we could be learning not to repeat, and I felt the history was interesting as the Kingsman. I could never write the characters as unique as Rasputin. I think the story of three cousins having a family squabble was extraordinary.”

Vaughn also explained how he coordinates action sequences with music, a distinctive characteristic prevalent throughout the Kingsman franchise.

“The first rule which will never be new is to tell a story with the action,” he said. “Narratives, narratives, narratives. Not having any action is boring, so we’ll never lose that rule and then it changes the action depending on the scene so in a modern Kingsman movie I doubt that there will be sword fighting. In this film sword fighting was exciting [...] With Rasputin, we looked in to the whole classic dancing and ballet and then I loved the idea of doing an action sequence with what were ‘modern’ gadgets, which all look very old and again, peculiar to us now. Ralph using a parachute which was a modern gadget [back then] and that, I thought was fascinating, taking old gadgets and coming up with modern sequences.” 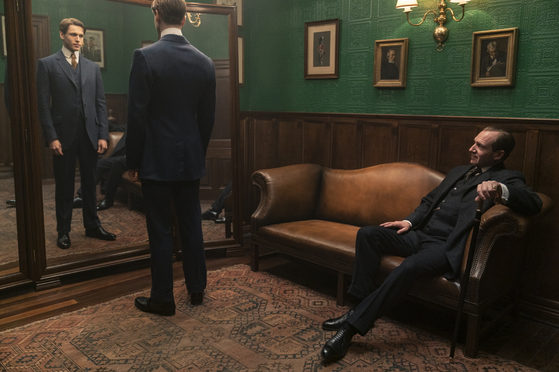 Harris Dickinson, left, as Conrad, the son of Oxford who has different values and beliefs than his father. [WALT DISNEY COMPANY KOREA]

Oxford shows his son Conrad a secret organization that he established which becomes the foundation for the spy organization "Kingman." [WALT DISNEY COMPANY KOREA]


While maintaining the same mischievous, quirky and unpredictable turn of narrative that “Kingsman: The Secret Service” and “Kingsman: The Golden Circle” had, Fiennes said that there are elements in this particular origin story that were unique, which was why he decided to feature in it. Fiennes is also one of the film’s executive producers.

“I think any origin story is exciting and so if you ask me what made me [feature in this film] — I wanted to be part of the telling of how the Kingsman agency came to be,” he said. “What was the origin [...] and at the heart of it there was a very real belief in courage, integrity, a kind of humanity, the kind that Matthew references, the knight at the round table which in England [represents] a good man and of course we can include women now but in mythic terms, these were the warriors. Whatever agenda [they have] these are the warriors for good. They fight for justice. They fight for the right, against the forces that are corrupt and destructive and malign and manipulative and coercive and aggressive. These forces are the ones that keep us whole and human with our integrity and our honesty and our regard for each other and our respect for each other intact. So without wanting to get too heavy, that’s what the center of it is [...] It’s [also] a great excuse for a fun ride of entertainment and action and emotional familial turmoil but that’s what I believe is at the center of this franchise.”

6th Child Rights Film Festival to be hosted online from Nov. 14 to 22