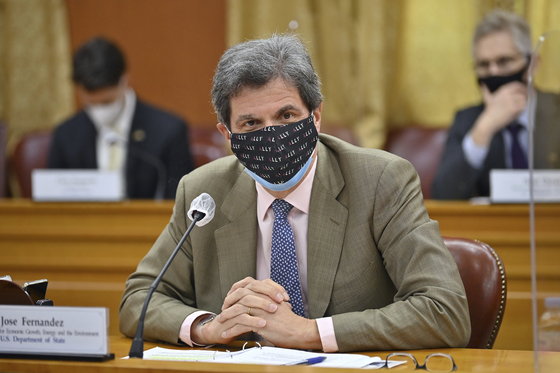 Jose Fernandez, the U.S. under secretary for economic growth, energy and the environment emphasized Korea’s role in the global semiconductor supply chain in a meeting with his counterparts in Seoul on Friday.

“The semiconductor shortages that were caused by Covid-19 highlighted the critical functions that these chips play in our daily lives and put a spotlight on Korea as a leader and essential partner in the global semiconductor supply chain,” said Fernandez in the meeting with Second Vice Foreign Minister Choi Jong-moon at the ministry headquarters in central Seoul.

“We firmly believe that Korea has much more to offer to the global economy,” he added. “You’ve got world class technical expertise, high quality transparent investment and foreign legislation and more. And this kind of cooperation brings enormous value from Korea to its partners and to the multilateral organizations with which it interacts.”

The under secretary traveled to Korea for the regular Korea-U.S. meeting on economy, the Senior Economic Dialogue. This meeting is the sixth of its kind since the dialogue began in 2015.

The dialogue was the first held since the inauguration of the Joe Biden administration in January. Topics that were discussed included those highlighted during the Korea-U.S. presidential summit in May, such as supply chains, science and technology, infrastructure, health and climate change and energy.

“The Korean government pays close attention to the Biden administration's recovery plan and their legislations,” said Choi during the meeting. “We sincerely hope that the bilateral trade and investment relations between our two countries will benefit from these acts, particularly in the areas of semiconductors, EV [electric vehicle] batteries, and green energy.”

While attending an economic forum hosted jointly by the Foreign Ministry and the State Department on Thursday, Fernandez also addressed possible cooperation with Korea on 5G networks.

The under secretary also met with executives of major Korean semiconductor and battery corporations, including Samsung Electronics, LG Energy Solution and Doosan Heavy Industries & Construction during his three-day trip to Seoul that began on Wednesday.