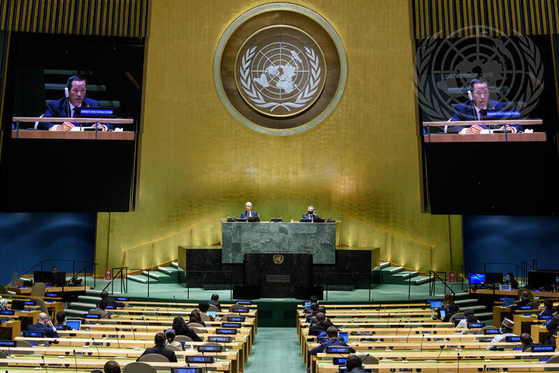 Permanent Representative of the Democratic People's Republic of Korea to the United Nations Kim Song (on screens), addresses the general debate of the General Assembly’s seventy-fifth session.[UN/LOEY FELIPE]

The UN General Assembly on Thursday passed by consensus a resolution condemning North Korean human rights violations, marking the 17th year in a row that such a resolution was passed by the assembly.

The resolution, put forward by a number of European Union member states including Austria, Belgium, the Czech Republic and Latvia, and others such as Canada and Switzerland, “condemns in the strongest terms the long-standing and ongoing systematic, widespread and gross violations of human rights in and by the Democratic People’s Republic of Korea.”

Similar in content to those adopted yearly since 2005, the resolution addresses “gross” human rights violations in the North including torture and other inhuman punishments of its citizens, the existence of political prison camps, all forms of sexual and gender-based violence, abductions of North Koreans and international citizens, severe restrictions on freedom of thought of North Koreans in online and offline spaces, as well as exploitation of workers sent abroad.

Stating that these violations “may amount to crimes against humanity,” the resolution called for swift investigations and a possible referral to the International Criminal Court, which was a first in 17 years.

“[The General Assembly] encourages the Security Council to [...] take appropriate action to ensure accountability, including through consideration of referral of the situation in the Democratic People’s Republic of Korea to the International Criminal Court and consideration of further sanctions in order to target effectively those who appear to be most responsible for human rights violations that the commission has said may constitute crimes against humanity,” the statement said.

Six members of the Security Council, including the United States, Britain and France, issued a statement on Wednesday to discuss North Korean human rights violations in an open meeting.

The resolution also called for further global action on the Covid-19 situation in the North, expressing “very deep concern at the precarious humanitarian situation in the country [...] exacerbated by the negative impact of the Covid-19 pandemic and the continued closure by the Democratic People’s Republic of Korea of its borders and government policies causing limitations in the availability of and access to adequate food.”

It urged the North Korean government to take “preventive and remedial action” and work with international donors and agencies to implement humanitarian programs.

The North closed its borders in January 2020 as the Covid-19 virus began to spread globally.

There have been offers of vaccines through the worldwide Covax initiative, which Pyongyang rejected. In September, the country rejected the offer of nearly 3 million doses of the Chinese-developed Sinovac vaccine from Covax. According to the World Health Organization, no vaccines have been administered in North Korea.

The resolution was drafted and sponsored by some 60 countries, which did not include South Korea. It was the third year in a row that it didn’t participate in drafting the resolution, however South Korea did take part in joining the consensus to pass the resolution at the assembly on Thursday.