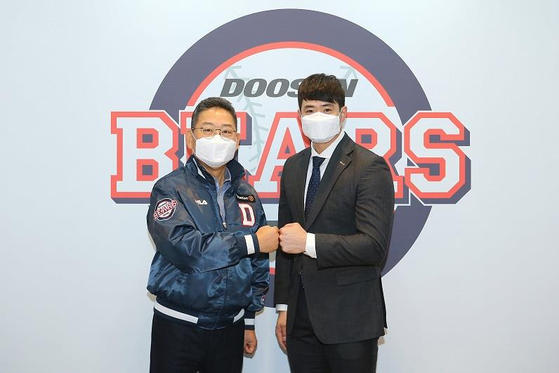 Kim Jae-hwan, right, poses for a photo after signing a new contract with the Doosan Bears on Friday. [DOOSAN BEARS]


Free agent outfielder Kim Jae-hwan has opted to stay with the Doosan Bears, signing a four-year deal worth 11.5 billion won ($9.7 million) on Friday.

Kim debuted with the Doosan Bears in 2008 and became a regular fixture in the club's starting lineup from the 2016 season. That year, he picked up 160 hits with 124 RBIs and 37 home runs for a .325 batting average, establishing himself as a serious power presence at the plate.

In 2018, Kim hit a huge 44 home runs and was named KBO MVP for the season. The league de-juiced its ball the following year, and Kim dropped to just 15 homers, but his power has gradually returned and in the 2021 season, Kim recorded 130 hits with 102 RBIs and 27 home runs for a .274 batting average.

The Bears focused all their efforts on Kim this offseason, reporting reaching Friday's deal after three rounds of negotiations.

"I've never thought about playing for anybody other than Doosan," Kim said. "I'm happy, but I feel a great sense of responsibility. I will do my best to perform well both on and off the field."