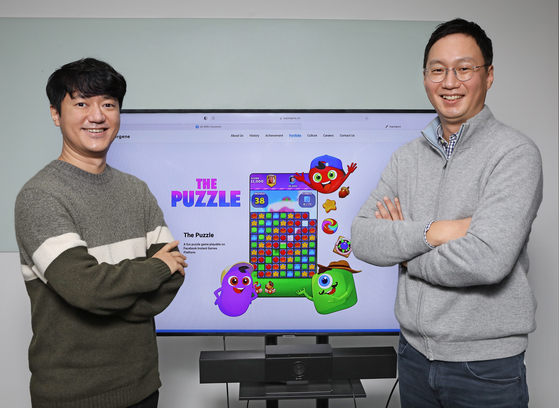 Na Young-chae, left, and Lee Chin-ho, co-CEOs and founders of Supergene, stand before a screen featuring Supergene's social game "The Puzzle" at its office in Pangyo, Gyeonggi. [PARK SANG-MOON]


The Philippines has the highest social media usage rate in the world with the most time spent online, at around 11 hours a day on average. Lee Chin-ho and Na Young-chae, co-CEOs and founders of Supergene, spotted the heavy media consumption as an opportunity for social mobile games, a light gaming format offered on social networking services.

Supergene's smash hit OMG, which can be played on Facebook Gaming, recorded 300 million monthly active users last year thanks to the increased time people spent online in the pandemic.

Boosted by the surge in users, the Korean start-up, which until last year operated mainly from the Philippines, raked in 26.7 billion won ($23 million) in sales and 23.3 billion won in profit last year, with earnings mostly coming from native ads and affiliations with Facebook. All of the revenue presently comes from outside of Korea, with the majority in North America, given that Facebook’s gaming service is not yet provided in Korea.

The company now looks to enter the Korean market with a social networking service independent of Facebook, on top of a range of new games on the social media network.

The following is an edited transcript of an interview with Lee and Na.


Q. Tell us the story how you founded a start-up specializing in social mobile games.

Lee: Both of us worked at Kakao until 2016, before we founded Supergene that year. At Kakao, we were initially tasked with spearheading a business operation in the Philippines as the instant messenger maker hoped to enter the market with its messenger service.

Its strategy changed to focus on the domestic market, but by the time, we had tried out different services in the Philippines to analyze the potential audience. One of the most successful was a social mobile game that finds users’ look-alike celebrities and lets them share the results on Facebook.

That game went viral and generated 10 million page views, an outcome that made us confident about the business potential of social games in the Philippines. One factor behind the heavy engagement online was that Filipino people tend to spend extensive amounts of time online, due partly to the lack of outdoor entertainment facilities and the hot, humid weather.

Seeing that potential, we told Kakao that we’d rather stay in the Philippines and start our own business.


Besides the high number of heavy internet users in the Philippines, what made the country the ideal base for a game company?

Lee: Above all, the Philippines has lower labor costs compared to Korea and other advanced economies like the United States and Europe. Another advantage is that the people use English as well as Tagalog. This means if we release our service in English, it can reach the audience and has the potential to spread further, which could scale up the user base. Average advertising costs are also lower in the Philippines compared to the United States.


OMG made Supergene’s name known to the wider public with the number of monthly active users hitting 300 million at its peak. How did the game take off?

Lee: Entering 2017, Supergene was able to break-even within four month of launch of our first service, wittybunny.com. In July, we went on to secure 1-billion-won in investment from Kakao Investment.

At this time, the company was looking for a new product that could ensure steady, yet robust revenue streams. We took a close look at the Facebook Gaming platform, where users could play light games without downloading apps.

The formula of OMG is simple: It tells you the colors that symbolize you and the flowers that go well with your image. But the point was that, since it was on Facebook, you could have conversations about the result, which in turn brings more players.

The game also met the unmet needs of Facebook users who want to express themselves but don't have a way to do so. Within two months of its launch in 2018, OMG recorded 100 million monthly active users and the figure topped 300 million in April, 2020. The service first went viral in the United States and the Philippines, but then it rippled across Mexico, Brazil, Europe and other Asian countries.


Still, social games tend to lose popularity at a quicker pace than standalone ones and Facebook’s visits in many parts of the world have leveled off. How can Supergene navigate those challenges?

Na: While we think that there is more room for growth on Facebook, but we have also given serious thought to how we could reduce our dependence on a single platform. The result is reflected in the launch of Signal, an online social matching service, this year.

The service is designed to find friends not specifically for dating purposes, but to explore common interests. We’ve focused on fine-tuning the features that match interests — from hobbies and locations to the type of pets people keep, their religion and their personality. User feedback, so far, is fairly good in terms of quality, given that a single user sends an average of 60 messages per day.

At the same time, we aim to increase the gaming lineup that could deliver a higher average revenue per user (ARPU). Light quizzes typically generate less revenue while puzzles and other games tend to deliver higher ARPU. In line with that, we’ve launched “The Puzzle,” which you can play with Facebook friends.