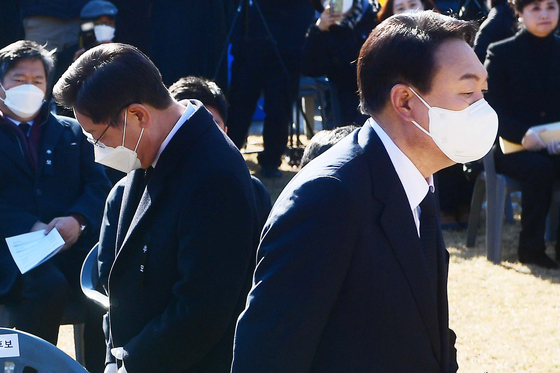 Presidential candidates Lee Jae-myung of the Democratic Party, left, and Yoon Suk-yeol of the People Power Party attend a ceremony marking the 89th anniversary of the death of independence activist Yun Bong-gil at Hyochang Park in Yongsan District, central Seoul, on Sunday. [NEWS1]


Revelations of misdeeds by the relatives of presidential candidates from both the ruling and main opposition parties have forced them to apologize on their behalves during the past week.

“[My wife’s] résumé was not accurate and caused controversy,” the candidate acknowledged at the PPP’s headquarters in Yeouido, western Seoul, after a campaign event. “It is at odds with the fairness and common sense for which I have advocated.”

Yoon's wife Kim Keon-hee, the head of a company called Kovana Contents that organizes exhibitions, faced a barrage of new accusations on Tuesday and Wednesday that she fabricated or exaggerated awards and positions on résumés she submitted for teaching posts at two universities in 2007 and 2013.

“I have to apply the same consistent principles and standards to my family, myself and those around me," Yoon added. “I will humbly accept the people’s criticism regarding my wife.”

The apology, which Yoon read from a piece of printer paper that he pulled out of his pocket, marked a shift from the candidate’s previous position that he could not answer for actions committed by his wife before they were married in 2012.

That position had been echoed by PPP leader Lee Jun-seok, who came to Kim’s defense in a radio interview with MBC on Tuesday, arguing that Kim’s résumé submissions should be considered separately from Yoon’s integrity as a candidate.

"A certain amount of criticism is fair if a presidential candidate fails to stop his wife’s misdeeds after they were married, but it is excessive to blame the candidate for things that happened before his marriage," he noted.

The ruling Democratic Party (DP) continued its offensive against Yoon despite the apology, calling it insincere and pointing to the candidate’s refusal to further comment on his wife’s career record when questioned by reporters on Saturday.

DP leader Song Young-gil called Yoon’s apology “forced” and “reluctant” on Saturday, comparing it to a gangster he once saw who climbed aboard public transport and read scripted apologies about his involvement in organized crime.

“The aim of the apology was usually to sell stuff to passengers or shake them down for money,” Song said, suggesting that Yoon also only apologized to prevent damage to his presidential prospects.

However, Yoon was not the only presidential candidate who faced scrutiny for misdeeds by his family.

DP presidential candidate Lee Jae-myung on Thursday was also forced to apologized for his son's past illegal gambling habit on Thursday, following media reports which traced comments on a gambling website to his son's e-mail address.

The DP candidate also found himself on Friday facing allegations that his son visited a massage parlor after comments on the parlor's website showed him criticizing the establishment in Seongnam, Gyeonggi, for not keeping to his scheduled appointment time.

Certain massage parlors in Korea are known to offer illegal sexual services under the guise of providing physical therapy.

When asked by a reporter after a party Covid-19 measures committee meeting why his son would leave a negative review about the massage parlor if he didn’t visit it, Lee said that the allegations of his son using sexual services were not true, and that he had no choice “as a parent” but to trust his child’s word.

Lee’s son was not the only of his relatives who has landed the candidate in hot water in recent weeks.

Lee was also criticized in November following revelations that he served as an attorney for a nephew who brutally murdered his girlfriend and her mother by barging into their residence in Gangdong District, eastern Seoul, in 2006, an incident which he described as a case of “dating violence.”

The nephew was sentenced to life imprisonment, and the punishment was upheld by the Supreme Court in 2007.

A member of the victims' family criticized Lee and his nephew Friday in an interview with the newspaper Munhwa Ilbo, saying he was “heartbroken” that Lee referred to the murders as simply dating violence and that the candidate never contacted him to offer his condolences.

Lee apologized after the interview was published, saying he used a “clumsy description” for the case and did not intend to hide or downplay the incident.