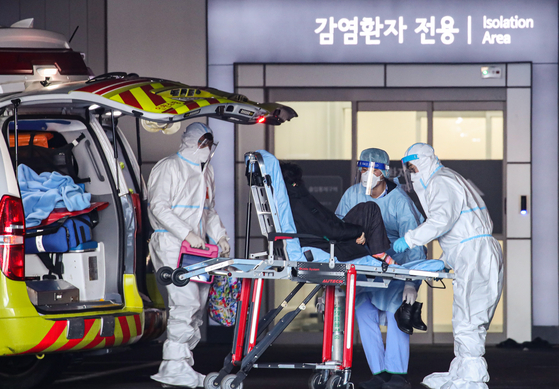 A Covid-19 patient arriving in an ambulance from Incheon is being transferred to Seoul Medical Center in Jungnang District, eastern Seoul, on Sunday, as the country struggles with a tight supply of hospital beds. [YONHAP]


The number of critical Covid-19 cases hit a new high of 1,025 on Sunday, above 1,000 for the second straight day amid toughened social distancing rules restored nationwide.

Intensive care capacity is being severely strained throughout the country, with some areas reporting no beds available for the sickest.

According to the Korea Disease Control and Prevention Agency (KDCA), the number of Covid-19 patients in critical condition rose by nine from the previous day and reached 1,025 as of Saturday midnight.

The number of people receiving this level of treatment has continued to hit new highs each day since the daily total broke the 800-mark on Dec. 8.

Following the surge in the number critical patients, almost 80 percent of nationwide intensive care unit (I.C.U.) beds were found to be occupied.

The Health Ministry said 79.1 percent of I.C.U. beds were occupied across the country as of 5 p.m. Saturday, with 279 out of 1,337 beds available. The government sees occupancy of over 75 percent as a red flag.

Some cities elsewhere in were fully occupied or nearly there.

Daejeon, Sejong and North Chungcheong had only one Covid-19 I.C.U. bed left, while North Gyeongsang's I.C.U. units were full.

Seventy-eight more people died of the virus, bringing the death toll to 4,722.

Of Sunday's reported fatalities, 73 people were in 60 or older, three in their 50s and two in their 40s. 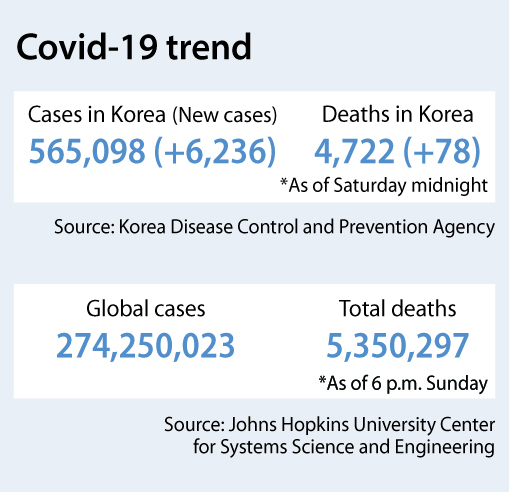 New infections were down by 447 on week, and went below 7,000 for the first time in five days, but the drop may have been due to fewer people getting tested over the weekend and the colder weather accompanied with heavy snow.

Twelve new cases of the new Omicron strain of the coronavirus were added, bringing the total to 178.

Of them, four people had their Covid-19 booster shots but still contracted the variant, according to health authorities.

Eighty-eight patients were unvaccinated, while 76 were inoculated with two doses of the vaccine and four only received one dose. The vaccination status of the remaining six had yet to be collected.

Starting Saturday, Korea put a pause on its "Living with Covid-19" scheme and restored stricter social distancing measures amid the virus spread showing no signs of letup.

The social gathering limits are four people nationwide, and the nighttime curfew is at 9 p.m. for restaurants, cafes and bars, 10 p.m. for other businesses considered less risky. The renewed strict social distancing measures will be implemented until Jan. 2, covering the Christmas and New Year's holiday period.

Sunday was the first day major religious events were held under the reintroduced distancing rules.

Religious establishments had been subject to criticism after Korea's first wave of the pandemic in 2020 was driven by the Shincheonji Church of Jesus, as well as the recent spread of the Omicron variant from a church in Incheon.

Under the latest rules, religious facilities had to limit their attendance to 30 percent of capacity, or up to 299 people, if unvaccinated participants are included.

If all are fully vaccinated, the limit is eased to 70 percent, but negative Covid-19 test results and exceptions for minors are not acknowledged.

Small gatherings of congregants are also limited to four people, and eating or praying aloud is prohibited.

Beginning Monday, schools will return to partial remote learning and limiting classroom capacity after pushing ahead with full in-person classes amid the country's return to normalcy.

Middle and high schools will be capped at two-thirds capacity.

Younger elementary students in first and second grade will still be allowed to go to classes every day, but third to sixth graders will be limited to three-fourths capacity. Kindergartens will also operate normally.

Some regions applied standards stronger than the central government measures.

In Seoul, the capacity of elementary schools was set at two-thirds of the total, higher than what the Education Ministry had proposed. This means two grades from third to sixth graders can attend school at the same time from the previously-allowed three grades, along with students in first to second grades, who fully attend in-person classes.

Some schools started winter break earlier to prevent further spread. Education authorities allow regions and schools to flexibly adjust their calendars according to the local virus situation and opinions of school members.

Following a recent recommendation of the local education office of South Gyeongsang, several schools in the province started vacation a week earlier than scheduled from last Friday.