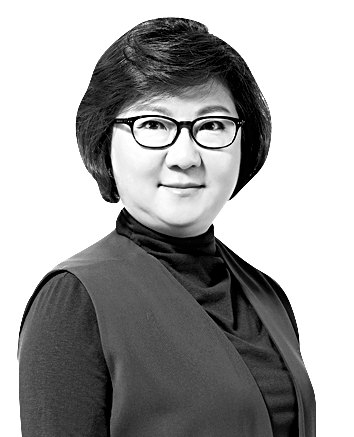 The author is the economic news editor of the JoongAng Ilbo.


I reluctantly agreed with the tracking down of people who had been in Itaewon despite the potential infringement on privacy rights because the move could help contain Covid-19.

When the authorities threatened to fine anyone arriving from overseas and breaking the two-week quarantine rule and kept tabs on them through mobile phones, I went along with the measure again, believing the forcible action can help control the spread quickly.

Korean society once again would have to give up their normal lives due to the worsening Covid-19 situation. Amid a surge in the number of critically ill and the rise in fatalities, the authorities have made normal lives impossible for unvaccinated people. Koreans must scan their vaccination records through QR code whenever they enter public places. Without it, they cannot have a drink in a coffee shop or have diner in restaurants.

Anyone breaking the rule must pay a 100,000 won ($84) fine. A business location allowing in vaccine-unverified person could be subject to 1.5 million won in fines or a 10-day business suspension.

But getting a digital verification of vaccination from the Korea Disease Control and Prevention Agency (KDCA) app is not easy even for those familiar with the internet and mobile applications.

Shop owners unfamiliar with digital technology also are equally confounded. Elderly owners of mom-and-pop stores or town diners are struggling to install digital scanners for the vaccine pass with the help of their younger peers nearby, but many are frustrated over how to handle the system.

The government bluntly told the elderly to seek help from their children to book vaccines online. The government has become a Big Brother keeping and eye on movements, and it helped widen the digital divide in society.

A recent poll shows that 10 percent of men and 23 percent of women 60 or older do not use wireless phones. Worse, owning a mobile phone and having the ability to effectively use mobile apps are a totally different matter.

The digital transformation has accelerated through Covid-19. Various surveys underscore a deeper divide in society between those who are acquainted with the internet and mobile technology and those who do not own such devices.

According to the National Information Society Agency (NIA), only 26.1 percent of the digital underdogs accessed information related to Covid-19 on the internet and mobile devices, while 57.7 percent of ordinary citizens did so last year. The data was collected before the introduction earlier this year of the vaccine shot booking and digital verification on vaccination. 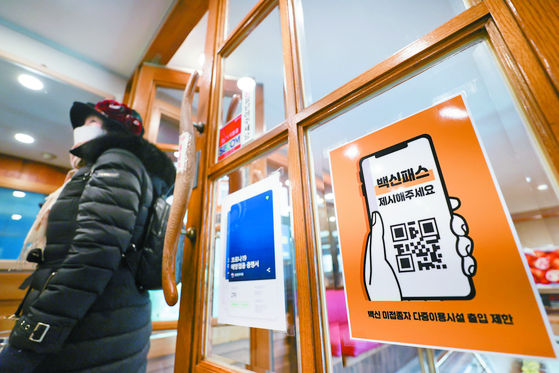 A guide on how to use the digital vaccine pass system is posted on the window of a restaurant in Seoul on Dec. 13, the day the system was switched on. [YONHAP]

For now, programs from local governments and community centers offer the sole solution. However, the budget for digital education programs has declines from 7.14 billion won in 2016 to 5.77 billion won in 2019, for instance. Programs also differ by regions due to the differences in their budgets.

In a report on the digital divide aggravated by Covid-19 last year, the National Budget Office urged stronger public and private-sector measures, pointing out that it is irresponsible for the government to demand individuals learn the skills on their own.

Rather than trying to narrow the digital gap, the government is only worsening the divide. It must first address the current vaccine pass system that can harden everyday lives. The government must guide people to receive stickers for vaccinations so that individuals can attach them to ID cards. Also, it must assist shop owners in installing the vaccine pass verification system.

The government must draw up effective measures to address the alarming digital divide.

Wishing for the end of the uniform (KOR)