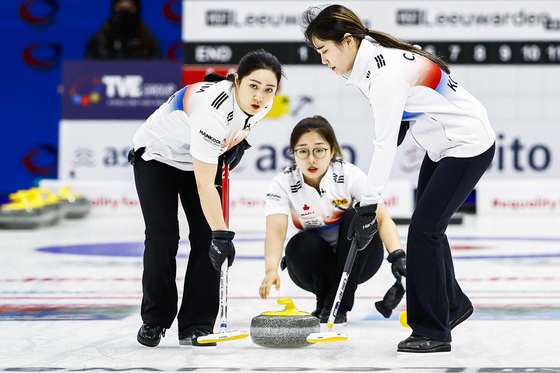 From left, Kim Kyeong-ae, Kim Seon-yeong and Kim Cho-hi compete on Saturday at the curling qualifying tournament for the 2022 Beijing Winter Olympics in the Elfstedenhal in Leeuwarden, the Netherlands. [AFP/YONHAP]


The Korean women's curling team — the infamous Team Kim of the PyeongChang Olympics — earned their Beijing Olympic berth as they beat Latvia in the women's World Curling Federation Olympic qualification playoff on Saturday in Leeuwarden, the Netherlands.

Only Team Kim will be able to represent Korea in the curling events at the Beijing Olympics as the men’s team and mixed team failed to earn berths. The Beijing Olympics will mark Team Kim’s second consecutive time on the big stage, following the 2018 PyeongChang Olympics where they won silver.

On Saturday, skip Kim Eun-jung, lead Kim Seon-yeong, second Kim Cho-hi, third Kim Kyeong-ae and alternate player Kim Yeong-mi took an 8-5 win against Latvia. Neither team were able to score in the first end, but in the second end Korea took 3 points and held onto that 3-point lead until the end. 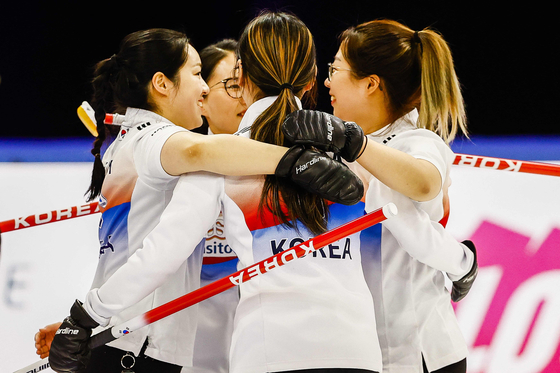 From left, Kim Kyeong-ae, Kim Eun-jung, Kim Cho-hi and Kim Seon-yeong, cheer after winning 8-5 against Latvia on Saturday at the curling qualifying tournament for the 2022 Beijing Winter Olympics in the Elfstedenhal in Leeuwarden, the Netherlands. [AFP/YONHAP]


Korea had to play eight preliminary matches and two playoffs to earn their Olympic berth. After the round robin, Korea, Scotland and Japan were all tied at the top with six wins and two losses.

Korea then took second place due to the Draw Shot Challenge results, played before each match to determine the rankings after a round robin. Like a regular shot in curling, the skip throws a draw and the lead and the second sweep to get the stone closer to the pin. The umpire measures the distance of the stone from the pin.

Korea lost the Draw Shot Challenge to Scotland and were pushed to the playoffs as runners-up. Korea lost their first playoff against No. 3 Japan 8-5 then faced Latvia on Saturday, vying for the one last berth.

With all curling qualifiers done, the 10 teams competing at the Olympics are set. Alongside Korea, host China, Switzerland, Russia, the United States, Sweden, Denmark, Canada, Scotland and Japan will compete at the women's curling event. Olympic curling starts on Feb. 2 and will continue until Feb. 20, 2022.