Even the street vendors are giving up as inflation bites

Even the street vendors are giving up as inflation bites 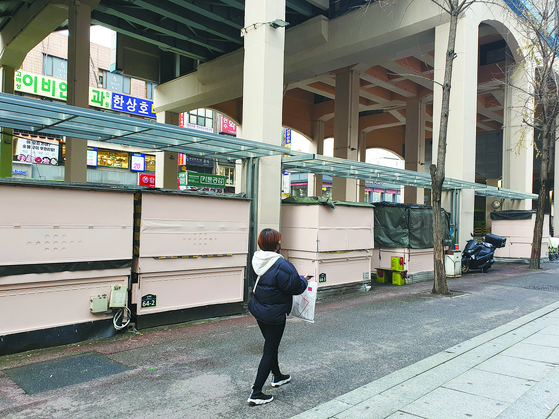 Some street vendors are giving up altogether and closing their humble businesses as inflation erodes what little profit they make and the pandemic decimates foot traffic.

Six vendors near Nowon Station in Nowon District, northern Seoul, closed for good at 2:30 p.m. on Dec. 15. They were all open last year, selling winter snacks, such as bungeoppang fish-shaped pastry and hotteok honey and nut-filled pancakes.

Only one is now left.

"I used to sell snacks at one of those places, but I've shut down my business because I can't earn much," said a 52-year-old who used to work as a street vendor. "Only one opens later at night, and the other five shut down."

With rising ingredient costs and fewer passersby, many street stalls are either shutting down or increasing prices.

"Even when I'm buying the same amount of ingredients, I spend 20 to 30 percent more than last year," said Lee Yong-ja, 61, who runs a bungeoppang street stall in Sanggye-dong, northern Seoul. "After ingredient costs and gas, I earn about 300 won (25 cent) for every 1,000 won of sales."

Based on Korea National Oil Corporation data, propane gas — used to fuel gas stoves of street stalls — sold for 2,410.12 won per kilogram in December. That's up 29.2 percent on year. Gas canister prices are set at the beginning of each month and remain same throughout the month.

"LPG prices rose so much, and I suffer losses for the day no matter how much I sell when buying new gas canisters," said Yang Oh-seung, 64, who sells hotteok as a vendor in Jongno District, central Seoul.

A 20-kilogram gas canister is said to last the street vendors about three days.

Fewer people outside since the pandemic started is also a major problem.

"I thought it would ease soon, but with Covid-19 cases over 7,000 per day, the number of passersby significantly decreased," said Yang.

According to the Seoul city government, there were 5,873 street vendors in Seoul as of September, down 3.4 percent from last year's 6,079. Compared to pre-pandemic 2019, the figure is down 6.7 percent.

The decrease may be bigger considering many street vendors don't register with the city government.

"About 30 to 40 percent of the street vendors near the Dongdaemun Design Plaza, which mostly sell to foreigners, closed since the outbreak of the pandemic," said Korea Democratic Street Venders Confederation spokesperson Cho Hang-ah, referring to the area in central Seoul.

Lim Jung-san, a 54-year-old who supplies bungeoppang ingredients to the vendors, said many of his customers have had to close.

It's becoming harder to find places that sell the winter snacks, and some customers are using applications to track down the few that remain. A GPS-based map app developed last February allows users to add places that sell bungeoppang.

"I checked the app, and there were no places that sold bungeoppang near my house, so I came all the way to a nearby neighborhood to buy one," said 25-year-old student Jung Jae-hwun. "I think there are a lot of places shutting down because even if the app says there is a bungeoppang vendor, sometimes there isn't one when I actually get there."