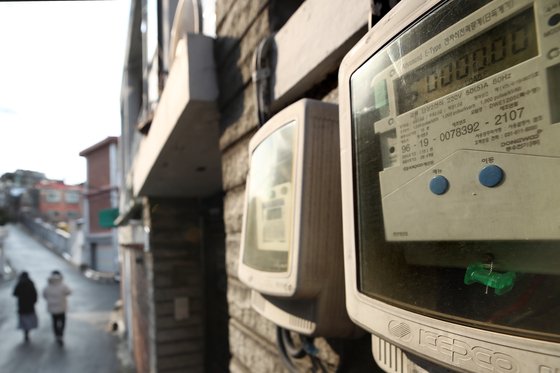 Energy meters at a low-rise apartment in Seoul on Monday. Kepco was ordered by the government to freeze electricity rates for the first quarter as part of the campaign to keep consumer prices down. [YONHAP]

Korea Electric Power Corp. (Kepco) has been ordered by the Ministry of Trade, Industry and Energy to hold electricity bills at current levels for the first three months of next year.

It is the first major initiative by the government to fix prices during the recent spate of inflation, though it has intervened in the egg market and released stockpiles of some vegetables.

Kepco on Monday said the government ordered the freeze on electricity pricing citing the difficulty that people face from rising consumer prices amid the pandemic.

According to Kepco, average fuel costs, including Bunker C, bituminous coal and LNG, between September and November this year were up 61 percent compared to the average between December 2019 and November 2020.

Kepco had requested the government approve an electricity rate increase of 3 won per kilowatt-hour. If that had been approved, a household using 350 kilowatt-hours a month would pay an addition 1,050 won each month.

This year, the government introduced a new billing system where cost of input changes are reflected quarterly rather than annually.

Rates were increased 3 won per kilowatt-hour for the October-to-December period as fuel prices rose.

The government lately have been under pressure over intensifying inflation, and the Finance Ministry has been looking into freezing public utility bills and other price-fixing measures.

Reports by Yonhap that the price of natural gas, which is used for heating and cooking, would be increased 10 percent this year were immediately clarified by the Energy Ministry, which said it is still in negotiations with the Ministry of Finance about pricing for next year.

Consumer prices have been rising 3 percent-plus on year for two months, the fastest rate in nearly a decade.

November's increase was the briskest since December 2011's 4.2 percent.

In the first nine months of the year, Kepco's net loss was 2.2 trillion won, compared with a 1.9 trillion won net profit in the same period a year earlier.

"The principle of a public utility bill is to pay the primary costs," Cheong said at a press conference held in Gwangju, conceding though that it is a matter of negotiation.

He said the billing system will have to be changed to reflect input costs more accurately.