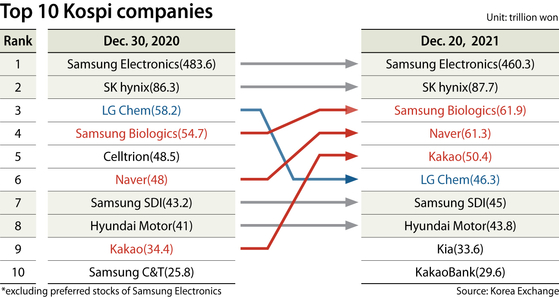 The Kospi top-ten list was shaken up this year as internet companies climbed the market-capitalization rankings.

Only four out of top-ten Kospi-listed companies at the end of last year maintained their positions on this list as of Monday, data from the Korea Exchange showed.

Chipmakers Samsung Electronics and SK hynix remained No. 1 and No. 2.

Competition for the third spot was tough, but Samsung Biologics narrowly beat Naver to claim that position.

The market cap of Samsung Biologics, which was fourth largest Kospi company at the end of last year, grew by 13.2 percent as of Monday to 61.9 trillion won ($51.9 billion). The company was selected to manufacture Moderna Covid-19 vaccines.

Naver and Kakao were the fourth and fifth largest Kospi companies as of Monday, respectively. Naver's market cap grew 27.7 percent and Kakao's 46.5 percent compared to the end of last year. Last year, Naver was ranked at sixth and Kakao ninth.

Naver and Kakao strengthened as they demonstrated the scalability of their businesses. Both have been able to expand rapidly using their core products as bases off which to grow.

A number of Kakao companies, such as KakaoBank and Kakao Pay, went public this year.

Naver and Kakao's growth partly slowed after the government in September scrutinized them for possible market domination.

LG Chem slid from third at the end of last year to sixth on Monday.

Celltrion fell from fifth at the end of last year to 11th on Monday. Samsung C&T, which was ranked 10th last year, fell to 17th Monday.

Their vacancies were filled by newcomers on the top-ten list, Kia and KakaoBank. Kia ranked ninth Monday and KakaoBank 10th.

"Changes in the top-ranking bluechips by market cap reflects the changes in the businesses that have good prospects in the future," said Samsung Securities analyst Jeong Myung-ji.