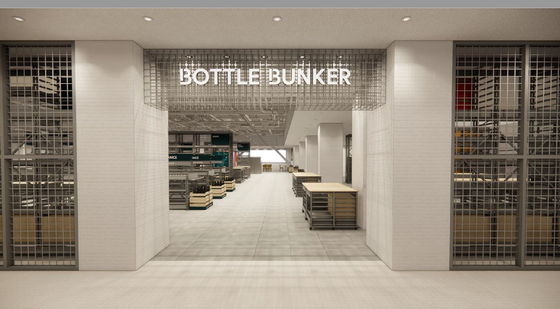 
Lotte Mart is fighting to attract online shoppers back to its stores, and its efforts include a major upgrade of its Jamsil branch in Jamsil, southern Seoul.

It will be reopened Thursday as Zettaplex, according to Lotte Shopping, which runs the chain.

Bottle Bunker, 1,322-square-meter (14,229 square feet) wine shop, will occupy 70 percent of the first floor. The company says it is the biggest wine store in Korea, with about 4,000 varieties.

The Jamsil branch is 14,214 square meters in total, with six floors above ground and one below.

The Bottle Bunker will have a tasting tap, where customers can try a range of wines for a small fee. Rather than displaying by country of origin, the store will categorize wines by food pairing and occasion.

Room X Home Lab, a furniture and home decor store, and LOHB's Plus, Lotte Shopping's health and beauty store, will have space in the Zettaplex, as will the Colioli pet supply store.

The company hopes that efforts at the Jamsil location will get people off their computers and back to real-world shopping.

"Zettaplex is a project that will show Lotte Mart's future vision to our customers," said Kang Sung-hyun, CEO of Lotte Mart. "We committed full efforts to the project, and we hope it can grow into one of the main branches of Lotte Mart."

According to the company, the Zettaplex branch carries 30 percent more food and groceries products compared to other Lotte Mart branches.

Lotte Shopping has been hit hard by the one-two punch of the pandemic and the rapid growth of e-commerce. It reported an earnings shock in the third quarter: 28.94 billion won ($25.8 million) in operating profit, down 74 percent on year. Sales were down 2.4 percent to 4 trillion won.