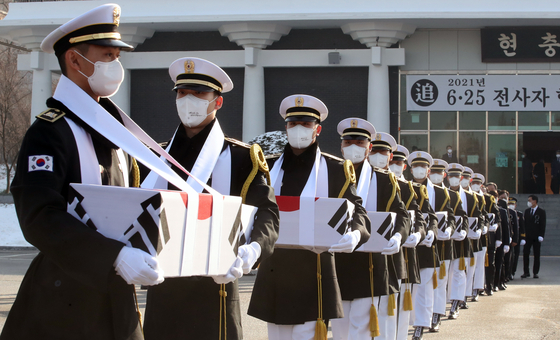 The remains of fallen soldiers in the 1950-53 Korean War are delivered to their final resting place during a ceremony at the Seoul National Cemetery in Dongjak District, southern Seoul, on Monday. [NEWS1]


The remains of 370 fallen soldiers unearthed from Korean War battlefields across the country were laid to rest in a ceremony at the Seoul National Cemetery in Dongjak District, southern Seoul, on Monday morning.

The ceremony included a report on the progress of ongoing excavations of remains, religious rites for the fallen soldiers being laid to rest, flower tributes to the fallen and the delivery of caskets to their final burial place.

The 370 remains buried at the national cemetery were excavated from 41 regions, including Cheorwon and Inje in Gangwon and Paju in Gyeonggi, near the inter-Korean border, between March and November by 31 units under the direction of the Defense Ministry’s excavation team and the Army and Marine Corps.

Of these remains, 64 were recovered in the area south of Arrowhead Ridge and White Horse Hill, inside the demilitarized zone (DMZ), where the Battle of White Horse took place.

The site where those 64 remains were uncovered saw some of the fiercest fighting during the 1950-53 Korean War. During the 10 days of fighting between Oct. 6 and Oct. 15, 1952, White Horse Hill exchanged hands 24 times.

The excavation of Korean War soldiers’ remains began in April 2000, almost 50 years after the beginning of the Korean War. Including the 370 remains unearthed this year, the project has uncovered approximately 10,200 remains.

That number pales in comparison to the figures for South Korean soldiers reported missing in action during the war — and whose bodies were never recovered — which, according to government estimates, amounts to approximately 120,000.

Although the Defense Ministry has collected some 70,000 DNA samples from the families of those who never returned from the war, many soldiers who went missing remain without such possible links to identify their remains even if they are found.

Objects excavated at the sites where the remains were discovered were also placed on display in an exhibition at the cemetery.

Scattered across the battlefields where their owners fell, the objects include makeshift grenades made from glass bottles filled with explosives, rusted ammunition, eating utensils and tattered shoes made from straps of leather, reflecting the harsh circumstances faced by soldiers during the war.

Other war memorabilia included an anti-gas mask with a canister which once contained oxygen, food tins and corroded guns and rifles.

An official from the Defense Ministry said, “We will continue to fulfill the country’s unending duty to return every last soldier who fell in the Korean War who sacrificed his life in service of the country to return them to the arms of his country and family.”