Son earns Spurs one point in tight draw with Liverpool

Son earns Spurs one point in tight draw with Liverpool 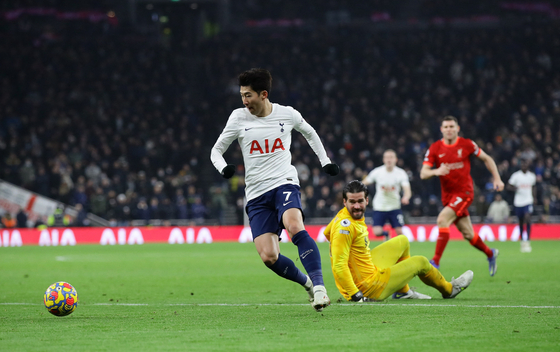 Son played the full 90 minutes against Liverpool on Sunday at Tottenham Hotspur Stadium in London, scoring the final goal of the match in the 74th minute to tie the score at 2-2 and earn Spurs one point.

It was a dramatic game, with Tottenham's Harry Kane breaking a long goal drought in the 13th minute to put Spurs ahead. Despite a number of opportunities to equalize, Tottenham were unable to produce, and it was Liverpool who scored the next two: Diogo Jota in the 35th minute and Andrew Robertson in the 69th.

Son seized on the opportunity to equalize, making up for a few near misses earlier in the game. Liverpool's chance at a rebuttal was seriously hampered just a few minutes later, with Robertson sent off in the 77th minute for a reckless hack on Emerson Royal.

Robertson's red card was the culmination of a very physical game, with eight yellow cards between the two teams including an early foul by Kane that could also have ended in red.

Sunday's draw marks a solid return for Tottenham after a Covid-19 outbreak that crippled the squad earlier this month. Spurs were forced to cancel their two Premier League games prior to the Liverpool match as a number of players and coaching staff tested positive for the virus.

Spurs initially reported two Covid-19 cases near the beginning of December. By Oct. 7, the outbreak had spread to six players and two members of staff, and by the end of the week, eight players were reportedly infected.

The first Tottenham fixture to be interrupted by the outbreak was the club's Europa Conference League game against Rennes last week.

Spurs pulled out of the Europa fixture because they did not have enough players to properly field a team. The decision was criticized by Rennes, who claim that Tottenham unilaterally made the decision without going through the proper UEFA channels.

The game will not be rescheduled, because a date could not be found when both sides are available before the Dec. 31 deadline. As a result, a UEFA disciplinary committee will now review how the result of the fixture will be determined.

Annex J of Europa Conference League regulations suggests that because Tottenham were responsible for the game's cancelation, Rennes are likely to be awarded a 3-0 win.

A game against Brighton on Dec. 12 was the second fixture to be canceled due to the outbreak. As a Premier League match, that game can be rescheduled later next year without too much disruption.

Spurs then had to cancel a game against Leicester last week, putting them three games behind most other Premier League teams due to an earlier cancelation as well.

Based on Sunday's performance, the absence hasn't hurt Son's game. Sunday's goal, scored in his 300th game for Tottenham, was his third in a row. Son previously scored on Dec. 2 and Dec. 5, taking him to seven goals on the season so far.

Speaking ahead of Sunday's game, Son discussed his Covid-19 vaccination status and threw his support behind Kane.

Son's decision to discuss vaccination comes at an important time for the league. While 81 percent of Premier League footballers received their first vaccine, according to figures released by the league in October, just 68 percent went back for the second jab.

That number — below Britain's 69.8 percent and well below Korea's 81 percent, according to Our World in Data figures — is believed to play a large part in the Premier League's ongoing battle with Covid-19. While Spurs have been one of the worst-hit teams in recent weeks, outbreaks have become commonplace at a number of top flight clubs.

Son also talked about Kane's goal drought, which, at the time of the press conference, had yet to be broken.

“It’s not just myself and Harry that are important," Son said. "It’s really important that we all create chances for him as well. It’s not all his fault because we could create more chances for him — as a team. The gaffer is working on it and we are working, too, as players.

"When a striker doesn’t score, the team feels we should create more for him. That is how I feel. I always believe in H — that he can score goals in any moment of a game and from any position. And the gaffer is helping all the players, not just me and Harry. And all the players are really open to taking the lessons and the advice."