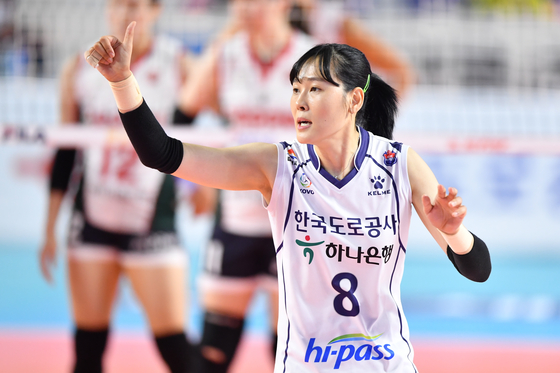 
Korea Expressway Corporation Hi-pass took a 3-1 victory over Seoul GS Caltex Kixx on Sunday to take the No. 2 spot on the V League table and extend their winning streak to eight matches.

Hi-pass came back from behind to defeat Kixx on Sunday. After conceding the first set 25-21, Hi-pass took the next three sets 25-19, clinching their eighth win in a row to take the No. 2 spot with 12 wins and four losses. It also took Hi-pass a step closer to club history — the most the club has ever won in a row is nine, a record set in both the 2011-2012 season and 2014-15 season.

Sunday's win could also mark a turning point in the recent Hi-pass vs. Kixx dynamic — prior to Sunday's game, the Kixx had taken the last two in a row. The Kixx have beaten Hi-pass 10 times in the last two years, losing only two games, both in the last month.

Hi-pass were voted the most promising club of the season on the league Media Day that took place on Oct. 13, before the start of the 2021-22 season. Hi-pass didn’t live up to that expectation in the first six matches, taking three wins and three losses. They then added five wins and one loss in the next six, before adding four more in the last four games, becoming the only club to win their last four matches.

Hi-pass currently tops the board for blocks and receives and is third in attacks and points. Hi-pass libero Yim Myung-ok tops the V League standing with a successful receiving rate of 52.91 percent and is third for the number of digs. Kelsie Daniel Payne of Hi-pass stands third for the most points and Park Jeong-ah comes in at ninth.

Hi-pass will next face the Industrial Bank of Korea on Thursday, looking for their ninth win in a row. IBK will play their second match under new head coach Kim Ho-chul after taking a 3-0 loss against the Incheon Heungkuk Life Insurance Pink Spiders on Saturday.