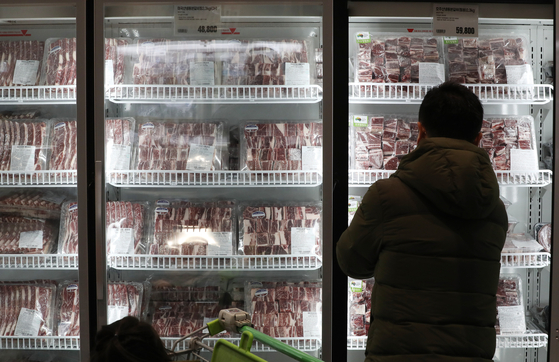 Imported beef section at a retail store in Goyang, Gyeonggi in 2017. [YONHAP]

Distribution of beef imports from Alberta, Canada have been suspended following the discovery of a mad cow disease case in the province.

According to Ministry of Agriculture, Food and Rural Affairs on Tuesday, the distribution of the meat has been suspended after a cow was found to be infected with Bovine Spongiform Encephalopathy (BSE) by the Canadian Food Inspection Agency.

It is the first case of mad cow disease in Alberta in six years.

The World Organisation for Animal Health (OIE) was notified about the case, and the Canadian embassy in Seoul reported it to the Korean government.

The BSE detected is atypical, which is rare but occurs in cows eight and older. And unlike typical BSE, which is caused by contaminated feed, atypical is not a risk to humans and is not transmissible.

The cow that tested positive did not enter circulation as beef or as feed.

Some 41 tons of Canadian beef has been imported but has yet to be distributed. Canadian beef is about 2.6 percent of total beef imports.

Canada in May was recognized by the OIE as a negligible BSE risk country, the safest for mad cow, almost a year after submitting its application in July 2020.

Canadian beef imports were stopped in May 2003 after mad cow disease was detected. Imports resumed in 2012.